An eight-foot-tall wooden idol from the Iron Age has been uncovered by archaeologists during work on the N5 Road Project in western Ireland, Roscommon County Council announced on Sunday. Excavations carried out by Archaeological Management Solutions (AMS) revealed the humanoid carving in Roscommon bog.

The Gortnacrannagh Idol, as the find has been dubbed, is a 1,600-year-old pagan sculpture cut from the split trunk of an oak tree. It is thought to have been ritually deposited in the wetlands. In addition to the idol, researchers discovered animal remains and a ritualistic dagger, suggesting that the site may have been used for animal sacrifice for the worship of a pagan deity. 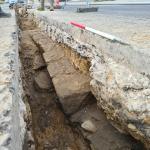 “Our ancestors saw wetlands as mystical places where they could connect with their gods and the Otherworld,” said Dr. Eve Campbell, the lead archaeologist on the project and a researcher at AMS, in a statement.

Roscommon bog is less than four miles from Rathcroghan—an ancient site of power and the prehistoric royal capital of Connachta, one of the five ancient Irish kingdoms. The area is home to more than 240 archaeological monuments, including Neolithic and Bronze Age burial mounds, ringforts, and earthworks, and was known as a place of ritual gatherings. In fact, Rathcroghan was thought to be an entrance to the otherworld—called “Ireland’s Gate to Hell” in the medieval era—where mythical monsters emerged from Oweynagat, a cave associated with the pagan celebration of Samhain (Halloween).

It’s rare to find surviving wooden artifacts, but the Gortnacrannagh Idol remained intact due to the waterlogged conditions of the bog. Cathy Moore, an expert in prehistoric wood, described the piece as being quite heavily and roughly worked. “There’s nine unevenly spaced and unevenly cut notches [along the body],” she said in a video explaining the find, “and then you have the shoulder and the neck, expanding out into a [small] head.” Moore believes these types of figurines represent the human form, which were ritually buried in Irish bogs, adding on Twitter that the find will “change what we understand about Irish prehistory.”

The Gortnacrannagh Idol is the largest of its kind ever discovered in Ireland, with only a dozen similar figurines found previously at sites across the country. Perhaps the most famous prehistoric wooden sculpture is the Shigir Idol, uncovered in a Russian peat bog—at 12,500 years old, it is the oldest known example of ritual art in the world.

According to researchers, the Gortnacrannagh Idol may have even been sacrificed in lieu of humans, functioning as a kind of wooden body. While the idol is well preserved, it is in two pieces. It is thought that it could have marked a special place in the landscape. According to Moore, the lower ends of wooden idols were often worked to a point, which suggests they may have stood upright.

University College Dublin (UCD) will house the Gortnacrannagh Idol for the next 3 years, while it undergoes restoration with conservator Susannah Kelly. The artifact will then go to the National Museum of Ireland. The team at AMS, along with the UCC Pallasboy Project and the UCD Centre for Experimental Archaeology and Material Culture, plan to create a replica of the idol to display at the Rathcroghan Centre in County Roscommon.

“Since the Gortnacrannagh Idol is such a unique and significant find, we are making a replica to help us understand the idol better and appreciate how it was made,” said AMS archaeologist Ros Ó Maoldúin. On August 28, the team will carve the replica at Craggaunowen Archaeology Park, where the public is welcome to attend.