Many of Alannah Farrell’s paintings pay tribute to queer life in New York, depicting friends, lovers, and dancers in intimate, surreal spaces. Portraiture seems to come easily to them, their subjects exuding a confident vitality in style and expression. The artist’s more autobiographical paintings, however, reveal a private longing—a vulnerability heightened in their recent work exploring gender dysphoria and medical transition.

Farrell’s latest self-portrait, Cutlet (2021), on view in “My Sweet Doppelgänger” at Richard Heller Gallery, is an incisive allusion to top surgery. Composed in acrylic and colored pencil on paper, it depicts the artist in a confined space, solemnly holding a kitchen knife to their chest. A small Band-Aid on one arm hints at drawn blood, yet the skin remains flushed in the face and in the hand that wields the blade. At the central point of tension, where serrated edge digs under breast, it looks like the skin may break at any moment. 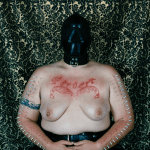 This image, while visceral, is of course just a painting; indeed, the artist’s quiet, resolved expression and relaxed posture suggest less committing a violent act than imagining how corporeal liberation might feel. Yet the framing and composition here—up close and cropped to the torso, much like what might appear in a mirror—suggest that Farrell considers the portrait and the body to be coextensive, blurring the distinction between infliction and representation.

In this sense, Farrell’s picture brings to mind not only Catherine Opie’s photographs, such as Self-Portrait/Cutting (1993), but also David Wojnarowicz’s notion of transition as a “state of perpetual freedom.” Still, that freedom is often met with hostility. Transmasculine and nonbinary artists regularly face censorship and content removal on social media (this work was deleted soon after Farrell posted it on Instagram), even as ads on the same channels promote body positivity. This contradiction shows just how deep gender biases continue to run. Farrell’s self-portrait strips away social stigma, portraying transsexuality as struggle intertwined with remedy.

Looking at Chuck Close Through his Portrait of Bill ClintonHow PFP-Based Projects Took Over the Market – ARTnews.com