BUT WHAT ABOUT ‘THE GUY SELLING ALL THE FAKES’? That was the complaint investigators said that they heard from dealers under scrutiny for trafficking looted antiquities, the New York Times reports. And so they looked into the man being mentioned, Mehrdad Sadigh. He is now accused of running what Manhattan’s district attorney, Cyrus Vance Jr. , described as a “fake antiquities mill” in Midtown. Sadigh has pleaded not guilty to a number of charges. The authorities say that they found hundreds of ersatz artifacts at his gallery, and materials that could have been used to make objects appear to be as old as ancient Egypt and Rome. Allegations against the dealer were aired publicly in 2019, when the Herbert Hoover Presidential Library and Museum in West Branch, Iowa, nixed a show with dozens of objects linked to his gallery after a University of Iowa professor declared that many were fake. Asked about the accusations by the West Branch Times, Sadigh said, “I don’t know anything about this.” 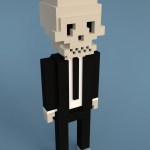 SPEAKING OF ALLEGED FAKES, the Wall Street Journal is the latest outlet to highlight the authenticity issues in the rough-and-tumble NFT world. “Common frauds include creating phony NFT artworks and fake platforms that purportedly sell art but actually steal credit-card information,” Kelly Crow writes. An artist whose nom de guerre is Fvckrender said he lost $4 million in cryptocurrency after downloading a virus. Not ideal! (“I’m an idiot,” he’s said.) On a happier NFT note, Shanti Escalante-De Mattei writes in ARTnews that the market for PFPs—profile pics—is hot. “In combining the thrill of gambling on stocks with the pleasures of creating a digital persona, PFP NFTs could reshape how works made in the medium are bought and made,” she writes. And artist Cai Guo-Qiang is readying a new NFT project—an edition of 99 tied to a work made with his trademark gunpowder technique, the South China Morning Post reports. Each will be priced at $999 (payable in crypto). It’s a project from TR Lab, whose backers include Wendi Murdoch and Christie’s deputy chairman Xin Li-Cohen, who said that Cai “wants to see what the technology can bring him. He is questioning whether this is still art. He is curious.”

Some visitors to the just-opened exhibition “The Art of Banksy: Without Limits” in Seoul have complained that most of the works on view are replicas of pieces by the street artist. (Out of about 150 items, only 27 are the real deal.) The company behind the unauthorized show has offered refunds. [The Korea Herald]

Theater maestro Andrew Lloyd Webber is showing some Pre-Raphaelite paintings he owns at the Theatre Royal Drury Lane in London. The Cats composer footed the £60 million (about $82.6 million) bill for a recent renovation of the historic venue. [The Art Newspaper]

More than 50 venues have signed on to participate in the first-ever Art Week Tokyo, which will run in early November. Art Basel is supporting the event, but a Basel rep emphasized, “Hong Kong is firmly the home of our Art Basel show in Asia and we have no plans to launch Art Basel in Tokyo.” [Ocula]

An exhibition at the German Historical Museum in Berlin examines how artists championed by—and, in some cases, closely aligned with—the Nazis continued to have successful careers after World War II. [Associated Press]

A new study of the bones of 17 people who died in Herculaneum during the eruption of Mount Vesuvius in 79 reveals that residents ate hulking amounts of fish—three times as much annually as people who live along the Mediterranean today. They also consumed a staggering amount of olive oil each year: more than five gallons apiece! [Science]

LIKE FATHER, LIKE SON. In September, an auctioneer on the Isle of Man, Murray Keefe, will sell the same L. S. Lowry painting that his father hammered all the way back in 1980, according to BBC News . Keefe came across the work—a charming street scene—while going through a home in the Manx village of Laxey, assisting the executors of an estate. “I went upstairs and there it was, hanging on the bedroom wall,” he said. “I was quite surprised really.” His father apparently sold the work for £21,500; this time, it is expected to go for more than £500,000 (about $687,000). [BBC News]