With his PBS TV series The Joy of Painting, the American painter and instructor Bob Ross won over viewers with his love of nature, his personal warmth, and his bountiful charisma. Ross would set up his easel set against a black void and finish idyllic tableaus of mountains, pines, and rivers, all in a matter of 30 minutes. Over the course of 400 episodes, produced between 1983 and 1994 and shown for years afterward, he quietly encouraged his audience to put aside their insecurities and doubts, saying, “Anyone can paint.” He instantly became a beloved pop culture icon.

Joshua Rofé’s new Netflix documentary Bob Ross: Happy Accidents, Betrayal & Greed looks to showcase an until-recently-unknown sinister side of Ross’s revered franchise. But Ross’s reputation goes more or less untouched throughout the course of the film—it is the founders of Bob Ross Inc., Annette and Walt Kowalski, who are depicted in an unflattering light. The film alleges that the Kowalskis stole Ross’s intellectual property rights, effectively swindling the artist’s son Steve out of profits from the sales of mugs, blankets, pillow cases, and paintings bearing his father’s face and happy maxims. (The film’s approach has already stirred controversy, with Bob Ross Inc. calling it an “inaccurate and heavily slanted portrayal.”) 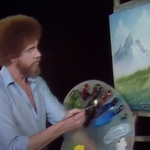 Rofé’s film is told primarily from the perspectives of Steve Ross and Dana Jester, a friend of Bob Ross, who together have tried, and failed, to regain the intellectual property rights from Bob Ross Inc. The duo seem to have agreed to speak to Rofé in a last-ditch effort at reclaiming them by igniting the public outrage needed to relitigate the case.

The shocking revelations, if they are to be believed, aren’t revealed until an hour into the hour-and-half documentary. Much of the film is dedicated to giving a somewhat dull account of Ross’s life and how he came to prominence. Ross started off as a traveling salesman, performing painting demonstrations in malls and other venues as a way to sell the materials he was using. During his tours across the country, he met Annette Kowalski, who recognized Ross’s talent not just as an artist but as a personality. Kowalski had recently lost a son when they met, and she has said that painting with Ross was a balm for her depression. In archival footage, Kowalski recalls telling Ross, “I don’t know what you’ve got, but I think we ought to bottle it, and sell it.” (The Kowalskis did not agree to participate in the documentary.)

Together with husband Walt, a retired CIA operative, Kowalski decided to make Ross the face of a new hobby craft business, a cottage industry of sorts in the late 1970s and early ’80s. After some years of struggle, Ross landed his now-iconic series The Joy of Painting, which almost immediately exploded to success.

Audiences were fascinated by how quickly Ross could paint. Using a wet-on-wet technique, in which Ross would rapidly apply layers of oil paint atop each other before letting them dry, he rapidly pulled together folksy scenes of unspoiled nature inspired by his time spent serving in the military in Alaska. Ross taught his audiences the tricks of being a Sunday painter: how to add texture to a mountainside or how the final addition of a tree could add dramatic perspective to a composition. The art he made was easy to understand and easy to replicate. As he told his audience again and again, “Talent is a pursued interest. Anything that you’re willing to practice, you can do.”

Beyond his calming and supportive presence, the documentary points to Ross’s sensuality as one reason why he achieved massive success among his mostly female audience. By way of example, the documentary includes numerous clips from The Joy of Painting where Ross’s sexual magnetism is on view: “Fluff it, tease it, pull it. Make love to it here, very gentle,” he says while painting a cloud. (Art historian Julia Friedman also points out that the title of the show mirrored two massively successful books of the time, The Joy of Cooking and The Joy of Sex.)

Throughout his meteoric rise, Annette and Walt Kowalski handled the business side of Ross’s growing empire. They set up a line of brushes, canvases, and other painter’s tools, which were disseminated across the country and then demonstrated and sold by local art teachers trained to paint like Ross. It is here that Rofé paints the Kowalskis as two businesspeople aggressively seeking to create a monopoly in the hobby painter market. Their practices eventually led to clashes between Ross and his business partners. According to the film, Ross wanted to bring joy to people, and they just wanted to bring in cash.

As this was happening, Ross’s wife Jane became sick and died only a few months later, in 1992. A few weeks after that, Ross was diagnosed with lymphoma. He continued making The Joy of Painting until 1994, and he died in 1995. The documentary alleges that the Kowalskis became even more aggressive during Ross’s illness. The Kowalskis would eventually gain those rights in a series of complex legal battles. The documentary’s focus on them doesn’t completely decipher for audiences the convoluted nature of the suits. Instead, it leaves viewers wondering about the Kowalskis’ capacity for cruelty. (Following the film’s release, the Kowalskis denied any rift between themselves and Bob Ross.)

The documentary ends on a bittersweet note. Like his father, Steve Ross has turned to painting—and teaching—as a salve as a result of his legal battle with the Kowalskis. We see him paint mountains, amid pines, in a mode that would befit his father. A final clip from The Joy of Painting is shown. Ross had brought on Steve to demonstrate his skills, and Bob signs off, saying, “I hope everyone has enjoyed you doing a beautiful little painting here. On behalf of my son Steve, thanks for watching.”