Kim Guiline, one of the pioneers of Korean abstract painting, has died at 85. Gallery Hyundai in Seoul, which represented him alongside Lehmann Maupin, said that the artist passed away in Paris, where he had lived and worked since 1961.

Gallery Hyundai said in its statement that Kim “consistently pursued awareness of the surface through 50 years his oeuvre. Kim also encouraged spectators to actively participate in his perceptual activities and suggested the act of looking at the works as a kind of meditation beyond mere encounters with paintings.”

Though geographically isolated from his contemporaries in South Korea, Kim was counted among the loose group of artists who contributed to the Dansaekhwa movement in the mid-1970s. With a name translating to “monochromatic painting,” Dansaekhwa emphasized the physicality of painting through flat, abstract color fields. Though cognizant of Western abstraction—Kim studied the Impressionists in Paris—Dansaekhwa embodied a kind of modernism redolent of an East Asian sensibility. 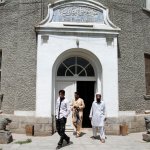 Kim often experimented with transparency in his paintings by scraping or carving furrow-like patterns in thin layers of paint over sculpted mulberry. In interviews, he described the practice as a nod to Korean heritage and a rejection of the propagandist painting style popularized by the authoritarian regime of Korea during the 1970s.

“Dansaekhwa was a movement created at a time when members of the group wanted to accomplish something new within painting,” he told the Asian Art Newspaper. “Being an artist during this period was already a bold choice, as it was the choice of a life that was marginal and antiestablishment. My work was certainly not overtly anti-establishment, but in my undertaking, I opened Korea towards something else, creating a true contrast with what was happening at the time.”

Kim was born in in 1936 in what is now North Korea. His father died when he was a child, leaving behind his mother, who had fled to the southern countryside. “With my mother being illiterate and no artistic family background, I truly jumped into the unknown with regards to my artistic life and career,” he said. Kim graduated from the Hankuk University of Foreign Studies before moving to France, where he studied art at the École des Beaux-Arts in Paris. He was as one of the first generation of Korean artists to settle in the French capital and viewed his work as a link between the artistic movements ensuing in each respective country.

By the late 1960s, Kim was focused primarily on creating formalist experiments in black and white. During the 1970s and ’80s, he adopted a palette of primary colors, often presented as repetitive egg-shaped dots.

“I started drawing dots in my work after asking question to myself: ‘What gives me comfort and stability when I look at pictures in a world that is full of complicated forms?’ A dot can be a start, an end, or become a line, or a form. Time, thoughts, and traces present in the dot,” Kim told Gallery Hyundai.

Today, Kim’s work is held in numerous public and private collections across South Korean including the Busan Museum of Art, the Daegu Art Museum, the National Museum of Contemporary Art in Gwacheon, and the Seoul Museum of Art. In 2017, the first solo presentation of his work in the United States was held at Lehmann Maupin in New York.

Like many of his peers, Kim associated color with spirituality and the five colors comprising his practice—red, yellow, green, white, and black—each represent different facets of his soul. “I have been trying to go towards a kind of purity where I project my soul on to the canvas which is actually like a window,” he told the Asian Art Newspaper. “The notion of window, or mirror, is very much present when I work on a canvas. I view my paintings as windows of my soul, that longs for a kind of purity.”