When artists Dash Snow and Dan Colen took over Jeffrey Deitch’s New York gallery in 2007, they filled the entire space with shredded phonebooks and invited their friends to party within the resulting installation. Titled Nest, the piece became the site of debauchery—piss and wine lined the walls by the time the show was done, and the gallery looked less like an art space than a disused loft. Deitch only gave the artists one instruction: don’t play with fire in the presence of all that torn-up paper. That, of course, was not something Colen and Snow could abide by.

In Moments Like This Never Last, a new documentary about Snow directed by Cheryl Dunn, we see footage of Snow inhabiting Nest in the wee hours of the morning. He picks up an aerosol spray can, places a lighter to it, and has a friend on a skateboard leap over the flame, his baggy jeans coming perilously close to it as he does so. Stills from that video ended up in a catalogue related to the Deitch exhibition. In the documentary, dealer Kathy Grayson reports that, while flipping through proofs of the book, Deitch came across those images and paused for a minute. Then, rather than castigating Snow, he continued paging through and chose to ignore it. 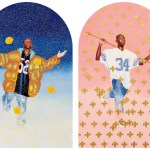 You can imagine how differently this might have played out were this the work of any other artist. Deitch would have been tougher on most other aspiring art stars, and probably a gallery assistant or two would have gone down for the count as well in the process. But this was Dash Snow, after all, and to this day, his bad-boy persona continues to inspire a legion of fans, who worship at the altar of his fame more than a decade after his death of a drug overdose in 2009.

Snow’s art career may have lasted fewer than 10 years, but it has become an integral part of the Downtown New York history from the 2000s. It has been difficult, as my colleague Rachel Wetzler once wrote, “to disentangle his work from the myth of his life.” His art has become overshadowed by the image of himself that he fostered—one of an impoverished man seeking freedom, and one that was seemingly at odds with his cushy background as a scion of a wealthy family.

Moments Like This Never Last does manage to address Snow’s privilege. We learn early on that Snow’s great-grandparents were the art-collecting couple John and Dominique de Menil, who founded the Menil Collection in Houston. During his lifetime, Snow disavowed the association with them, however. “Maybe I was a rich kid ’til I was 13,” he says in an archival recording. “It’s not like they were giving me money.” Snow had a rough upbringing, too—as a teenager, he was sent away to a juvenile detention facility by his mother, only to escape it a few years later and head to New York. One of his friends, the photographer Ryan McGinley, recalls that Snow was periodically houseless during the early ’00s, and that Snow sometimes slept on the subway at night.

It is hard to square Snow’s remarks about his own economic background with others made throughout Dunn’s documentary. At the start of his career, Snow tagged tunnels and buildings around New York. His graffiti aroused the suspicion of his neighbors, and so he lied to them and said he was half–Puerto Rican to “make it more okay.” Given his sarcasm as he recounts this, it seems that Snow was keenly aware of how such a remark sounded. Later on, Snow was arrested for having a graffiti marker on him and thrown in jail for a night. Of this detainment, he says, “To be honest, I’m not racist at all, but I’m white and it helps.” It seems that Snow means this as a half-baked recognition of his privilege, though it still falls flat.

In the early and mid-’00s, Snow fell in with a Downtown crew that included McGinley, Colen, and actor and dealer Leo Fitzpatrick, all of whom are now mainstays in the New York art world. In a dingy 7th Street apartment, they regularly held parties where attendees could expect drugs and sex in excess. “It was like the most fucked-up episode of Seinfeld or Friends you’d ever seen,” Fitzpatrick says of the gatherings there.

Gradually, the art-world elite caught wind of Snow’s work, which often took the form of ramshackle installations, nihilistic collages, and amateurish-looking Polaroids of his friends having sex and getting high. (In fact, many of these pictures—whose subjects include cocaine being snorted off erect penises, revelers vomiting, and many other seamy activities—were staged.) These works were decidedly more palatable to dealers and curators than, say, Snow’s graffiti, which lined city streets and even at one point the Brooklyn Bridge. Some of these photographs even ended up in the 2006 Whitney Biennial, whose curators likened Snow’s aesthetic to Nan Goldin’s images of the Downtown scene in the ’80s and ’90s. Soon enough, Snow got a full-length profile in New York Magazine—a rare feat for an up-and-comer, and one that Snow’s friends claim he hated. (In a video made afterward, Snow hired male sex workers to masturbate onto a lightbox displaying a blow-up of some of that article’s effusive display copy.)

The speed with which Snow rose to fame was enough to give anyone whiplash, and Moments Like This Never Last often attempts to re-create the disorientation that the artist seems to have often felt. Most shots are blurred or shaky; rarely ever does Dunn’s camera stay still. Figures like Deitch, Colen, McGinley, and two of Snow’s romantic partners, Agathe Snow and Jade Berreau, provide insights into Snow and his work, though their faces are rarely ever shown as they speak. With their voices unglued from their bodies, Dunn only heightens the drug- and alcohol-induced confusion Snow may have experienced, particularly in the later years of his career.

As the film reaches its tragic climax, it explores the way that Snow’s family life with Berreau, with whom he had a child, was strained by his addiction to heroin. “With [his] addiction, he did not feel free,” Berreau says. Another was his star status, which began to consume his life. When the gallery Contemporary Fine Arts Berlin hosted a massive survey of his recent output in 2007, for example, ads featuring Snow’s face were pasted around the German capital, allegedly without Snow being told in advance. Nevertheless, crowds came in droves, and among the artists to stop by were Tal R, Christopher Wool, and Wim Wenders.

With minimal success, Moments Like This Never Last attempts to cast Snow as a figure who fell prey to an art world that feeds on young, fragile artists. It would be easy to accept that tidy conclusion were it not for the fact that Snow so carefully honed his own celebrity. The archival interviews Dunn offers depict a punkish artist who knows his audience. “I don’t believe in laws or the system at any point,” he says in one. Apparently, that statement need not apply to the art world.

It’s useful to consider how often people interviewed by Dunn compare him to other artists who carefully molded their representation in the media. “He was the most charismatic artist I met since Jean-Michel Basquiat, who also embodied so much of his aesthetic in his person,” says Deitch. Critic David Rimanelli comes armed with a defense against Snow’s naysayers. “His mother’s someone, his grandmother’s someone—so what? I think Manet, his mother was the goddaughter of the king of Sweden,” he says. Then, with a hearty laugh, Rimanelli adds, “Do you not like Manet? He was a rich kid too!”