‘IS THIS MAN AMERICA’S GREATEST PHOTOGRAPHER?’ That was the question that the magazine American Photographer used to accompany an entire 1982 issue devoted to the Japanese American photographer Hiro, whose surreal and seductive images created some of the defining fashion spreads and advertisements of the postwar era. After a remarkable career, Hiro, who was born Yasuhiro Wakabayashi, has died at 90, the New York Times reports. A protégé of Richard Avedon , Hiro snapped bracingly elegant (and sometimes unusual) images, like an ant atop a red toenail and a woman breathing out a swirling cloud of smoke. “With the pragmatic brilliance of a Renaissance master, American Photographer declared, “Hiro has changed the way photographs look, and with an endlessly inventive technique has changed the way photographers work.” 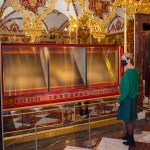 IT IS A STORY OF SUPERLATIVES. The burglary of the Green Vault in Dresden, Germany, in 2019, has been “described as one of the most costly art heists in history,” Joshua Hammer writes in GQ , and “the ensuing dragnet was one of the largest police operations in postwar German history.” The loot included “a 49-carat cushion-cut stone of unusual radiance and purity”—$1.2 billion has been bandied as the value of the total haul. But it was just one of many brazen thefts to hit Germany in recent years, Hammer reports in an article that is a rollicking overview of the investigation, a deep dive into the Remmo family (some of whose members were convicted in the Green Vault case), and a mini-profile of Augustus II, who commissioned the storied museum and its contents—which remain missing. The Green Vault’s director, Dirk Syndram , offered this description of the affair: “It was like when you feel totally fit and healthy and someone tells you that you are in the last stage of cancer.”

The scholar Ernst van de Wetering, who spent nearly a half-century studying the work of Rembrandt with the Rembrandt Research Project, weighing in on the authenticity (and inauthenticity) of paintings attributed to the master, has died at 83. [The Art Newspaper]

The United States has returned to Thailand 13 Buddhist artifacts that were confiscated by the Manhattan district attorney’s office on the grounds that they had been illegally obtained by the dealer Subhash Kapoor. Thailand is planning an exhibition of the work. Kapoor has been accused of running a gigantic smuggling ring and is standing trial in India. [Bangkok Post]

The recent change in NCAA rules that allows college athletes to be paid in various ways has led to all kinds of endorsements, but it has also allowed some “to show off their creative, artistic sides,” the Associated Press reports. SMU football player Ra-Sun Kazadi, for one, has been able to sell his paintings. [AP]

No one likes to learn that their art has ended up in the trash, but for the Edmonton artist Michael Victoria Moore, it was a relief: she was recently informed that a painting she made, which had been stolen last year, was discovered in a dumpster. The finder actually took it home because she liked it, and one of her friends recognized it as a missing painting she had read a story about. Tally that as a win for journalism. [CBC]

A new online database—Women Who Built Illinois—documents the work of “female architects, engineers, developers, designers, builders, landscape architects, interior designers, and clients” in the Prairie State between 1879 and 1979. The nonprofit group Landmarks Illinois is helming the initiative. [The Edwardsville Intelligencer]

The Okryu Exhibition Hall in Pyongyang, North Korea, is currently hosting an exhibition to celebrate the 74th anniversary of the creation of the Pyongyang University of Fine Arts. [Yonhap]

IT IS NEVER TOO LATE TO CHANGE CAREERS. The director and CEO of the Virginia Museum of Fine Arts, Alex Nyerges, has led various museums over 36 years, but he actually started his professional life thinking he would be an archaeologist. “My first paying job was for the Smithsonian Institution, digging out in Eastern Colorado,” Nyerges said in an interview with Blooloop (“the world’s most read news source for visitor attractions professionals”). “Yet, despite having spent 6 to 7 years in the field, I realized at this point that I hated archaeology. I hated dirt. What I really liked was the objects. I was interested in beauty and the history around objects and material culture.” [Blooloop]