Just what is getting fixed in Eva Beresin’s Fixing It (2021) is unclear. The ten-foot-wide canvas depicts one unclothed figure with rosy cheeks and red lips cupping the face of another in her hand. The gesture appears tender and simple but is embedded in a larger drama with a cast of animals and wraiths.

Riding piggyback on the shoulders of the fixer-woman is another female figure who also reaches toward the troubled face. Her thin, elongated arm tapers to a swipe of pale peach pigment as it approaches the person in need. At the point of contact, a soaring bird with cartoonish, googly eyes and a sharp beak interposes its dripping, Prussian-blue-rimmed wing. At another juncture in the lower right corner, a dog intervenes, subtly but decisively inserting its crooked face into the V formed by the intertwined hands of the comforted figure and another person beyond the frame. Opposite the dog, a mustard-breasted bird stares out of the painting like the only sober witness to this odd tableau, far more self-possessed than the three wrigglingly incomplete observers at the upper right. 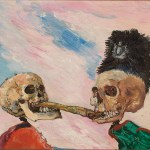 As in many of Beresin’s other recent paintings at M+B, this work elevates a familiar, ordinary interaction to the vaguely allegorical. Physical dynamics among the players imply complicated internal entanglements. Omens abound, and not just in the show’s title, “Beware of the spirits that you call.” Beresin conjures them with frenetic strokes that register all the scene’s implicit frictions—between drab and garish; emblematic humans and totemic animals; living things and those not fully there; and maybe also the gendered, servile motions associated with female caregiving and the more empowered agency of her own brush. Beresin, born in Budapest and based in Vienna, has been likened, aptly, to the brilliant oddball James Ensor, who made surface play of dark, private dangers, eliciting first a laugh, then a prolonged, despairing sigh. She, too, weds gravitas to caricature. Whatever is being tended to in this painting—with its fleshy, muddled, juicy energy—stays unfixed.

How Are NFTs Shown in Galleries? – ARTnews.comHow Ashley O’Shay Uplifts Black Female Activists Without Deifying Them