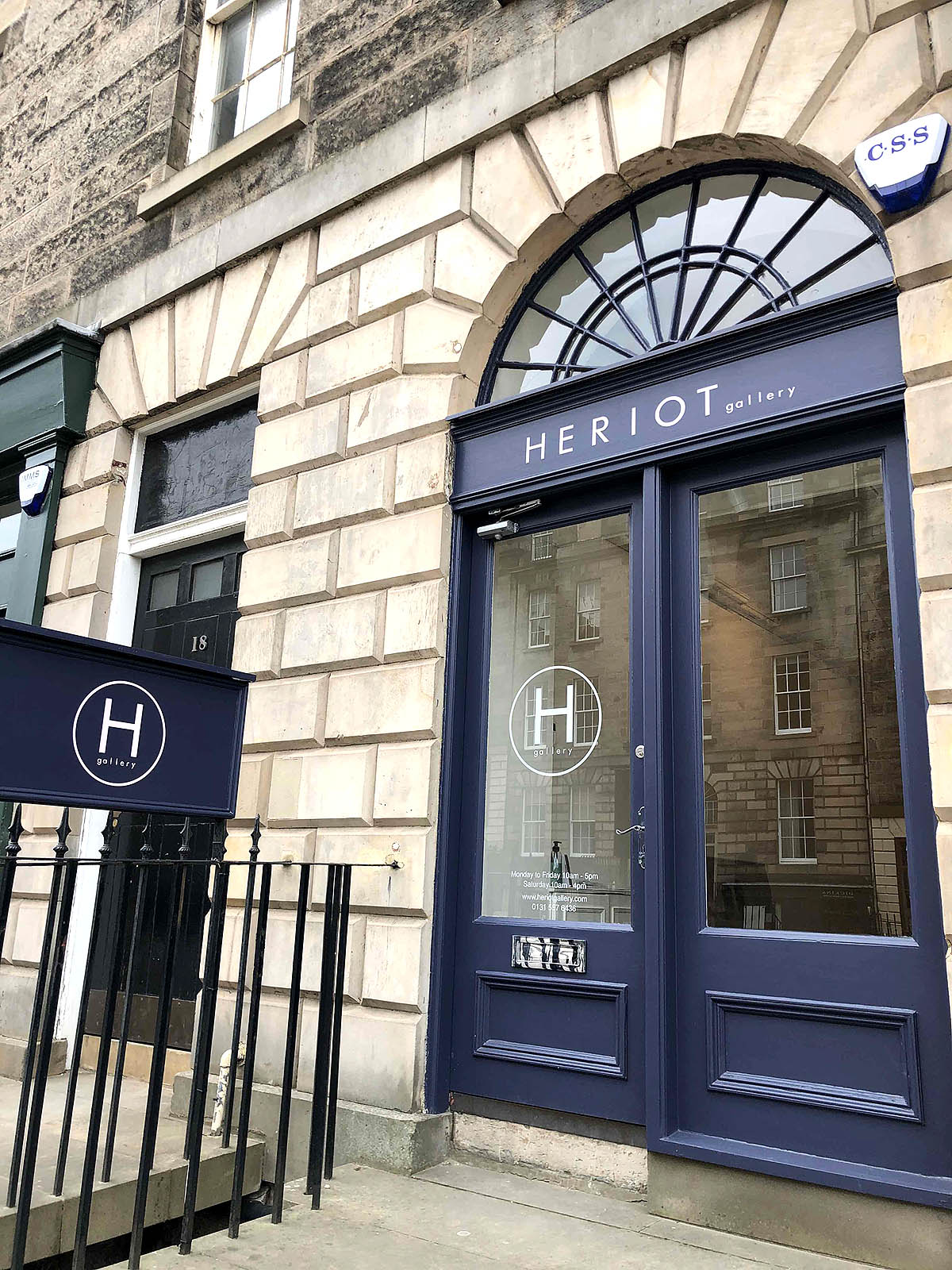 The Edinburgh Gallery, later renamed the Grilli Gallery, has been a popular and successful art venue for several decades at 20a Dundas Street. Now, after a smart makeover, the freshly painted door has just opened at the new Heriot Gallery.The inaugural exhibition for July 2021 by six distinctive and diverse artists, focuses on life and nature, floral studies and the human form.

Kirsty Lorenz is inspired by flowers, plants and wild herbs with their traditional healing powers. The botanical accuracy in Votive Offering #101, Pak choi, Lettuce and Nasturtium is uncanny: the velvety touch of the red and yellow tinted petals, tiny blue buds and bundle of green leaves with a glossy sheen. Votive means an offering in fulfilment of a vow, so perhaps a bride’s bouquet, hand-picked garden flowers to imbue a story of sweet romance.

Votive #81, Apple blossom on silver depicts the delicacy of the pink flowers, white blossom, serrated leaves, spiky stems.  Apple blossom is a Celtic symbol of love, peace and fertility and often decorated a couple’s bed-chamber.  Other posies too: lavender, mint and marjoram, akin to Ophelia’s garland of rosemary, violets and daisies. In her art, Lorenz explores the language of flowers and connection between the human spirit and power of nature.

Purple Hearts is a lovely, serene still life – the flourish of the crimson, pink and indigo blooms, fat bunches of slender green stems in the shimmering water, sunlight reflecting on the glass vases. One can imagine the time and patience to capture this quiet domestic scene. with clarity, care and precision.

Another bold composition, Maybe Tomorrow is a flurry of pink with swirling brushstrokes, fine texture of fragile petals and soft linen with subtle luminosity, all part of her vividly representational technique.

Jane Gardiner describes herself as an ‘Oil Painter, Printmaker, dreaming of the Venice Carnival.’ Here in a series of decorative portraits, she illustrates the lavish, lively theatricality of the Mardi Gras Festival 2019.

Three young girls, perhaps at their first Masquerade ball, pose in their crinoline gowns in So We Grow Together, their faces hidden to protect their identity and social class. (Mask wearing, of course, now has a very different connotation). The iconic presence of pigeons in St. Mark’s Square is reflected in the patterned ‘wallpaper’ backdrop.

Richly textured detail of embroidered brocade and a draped silk scarf in Marie, as well as her neatly coiffed hair. These and other bold portraits create a tangible sense of immediacy and movement, being part of the charismatic party atmosphere of the Venice Carnival.

With a similar fascination for theatricality, Cherylene Dyer invites singers, dancers and actors to be her models in her figurative work. As she says, ‘I like my subjects to appear mysterious and ambiguous.’ In Self Contained, a slender young girl, perhaps in a swimsuit, perches on a stool looking anxious, her shoulders hunched, arms stretched out, as if begging for help.

In Reversal 2, the model is partly wrapped in a towel, twisting her body around to gaze at the viewer with a sullen glare, as if caught unawares by someone while exposed in semi-nakedness.

With the simple costume prop of a crown, the actor-sitter in Appearances hides her own identity to take on the role of a character. Dyer has an intriguing, dramatic approach to portraiture. The contrasting duality between realism and performance to express emotional feelings is depicted with such imaginative vision.

Angela Reilly studied fine art at Duncan of Jordanstone College of Art and Design, quickly establishing a successful career, exhibiting in Scotland, London and New York. As well as many accolades, her Self-Portrait received third prize at the prestigious BP Portrait Award, 2006, which led to many important commissions. Just recently she has been shortlisted for the Ruth Borchard Prize, 2021.

Portrait is another ‘selfie’, a serious profile in which facial skin, bone structure, strands of hair are all meticulously crafted. With comparisons to the explicit life drawings by Lucien Freud and Jenny Saville, Reilly has a similar masterly skill to portray the human body: ‘Flesh was the reason why oil paint was invented.’ – Willem de Kooning.

With unflinching photographic realism, Merge depicts the soft rolls of fat, folds of flesh, veins, muscles and bony kneecap in intimate close up.

A crouching woman in Enfold is all about her physical authenticity – the surface of skin and anatomical lines of colliding limbs, bathed in soft light and shadow. The classic beauty of the female body is viewed here in a more vulnerable mode, naked rather than nude, stripped down to flesh and bone, to reveal hidden feelings of shame, shyness and insecurity.

Anthony Scullion describes his artwork as following ‘the tradition of the chiaroscuro of Rembrandt, the spirituality of Giacometti, and the distortion of Bacon’. In an alien, dreamlike environment, Scullion’s isolated figures seem to be part of a surreal filmic narrative. Two Studies for Missing is reminiscent of evacuee children during World War II, sent away to the countryside to stay with a strange family. This little girl looks lost and abandoned, quietly weeping, hands covering her face.

Likewise, Portrait Study shows a young boy, his face crumpled in despair, whatever the situation may be.

A message of hope, perhaps, in Guide as a young child carries a white flag in defiance with a sign for mercy. From traditional fairy tales to global charity appeals and the urban graffiti drawings by Banksy, children have long been the protagonists to illustrate hardship and inequalities of society – a universal symbol of innocence to evoke empathy. Through these dark, scratched, sketchy graffiti-style illustrations, Scullion is like a visual poet, sending out a compassionate message about the fragile state of humanity in today’s fractured world.

This is a most inspiring and dynamic exhibition, bringing a breath of fresh air to the art scene on Dundas Street. The co-owners of the Heriot Gallery, Angela Reilly and Lorna McKenna, plan to curate shows of innovative, challenging contemporary artwork by local and international artists.

With grateful thanks to Artmag Contributor Vivien Devlin for this review.