One of Italy’s most wanted fugitives, an alleged kingpin in the Naples-based Camorra organized crime syndicate, has been arrested in Dubai under suspicion of buying black market van Gogh paintings.

Raffaele Imperiale, thought by police to be a major organized crime figure, was arrested on August 4 and is being held in the United Arab Emirates awaiting extradition, Italy’s state police and financial crimes police organizations said in a joint statement. Imperiale has been sought by authorities since 2016 for alleged money laundering and international drug trafficking.

“He was able to construct an imposing network,’’ investigators said. Interior minister Luciana Lamorgese called Imperiale “a top exponent of international drug trafficking and money laundering, who accumulated huge amounts of illicit wealth thanks above all to cocaine sales.” Throughout his exploits, his ties to the influential Camorra families helped him survive various feuds among the Naples clans. 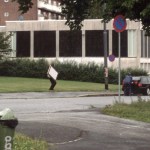 In 2016, Italian authorities recovered two van Gogh paintings stolen in 2002 from an Amsterdam museum devoted to the artist. The works, View of the Sea at Scheveningen (1882) and Congregation Leaving the Reformed Church in Nuenen (1884–85), had been stashed in a farmhouse on land owned by Imperiale in the town of his birth, Castellammare di Stabia.

“The wealth illicitly accumulated allowed him to buy on the black market two Van Gogh paintings of unquantifiable value,” police said. Earlier this year, Imperiale gave an interview to the Neapolitan newspaper Il Mattino in which he denied any involvement in the theft, but admitted to having bought both works.

“I bought them directly from the thief, because the price was attractive. But most of all because I love art,’’ Imperiale told the publication.