In the Philippines, street art scene is emerging to a fully-fledged art form. Graffitis and murals has recently become widespread in cities such as in Manila, the country’s capital. From the art galleries, you can now see art on building facades, walkways, underpasses, demolished walls, pavements, basically anywhere more accessible to the masses.

Given the country’s rich history with Asian, European, and American influences, Philippine street art is indeed vibrant and diverse. Street art had been avenue for so many things – from showcasing the country’s culture and history to being a way to protest socio-political issues.

Here are some stunning pieces by local street artists. 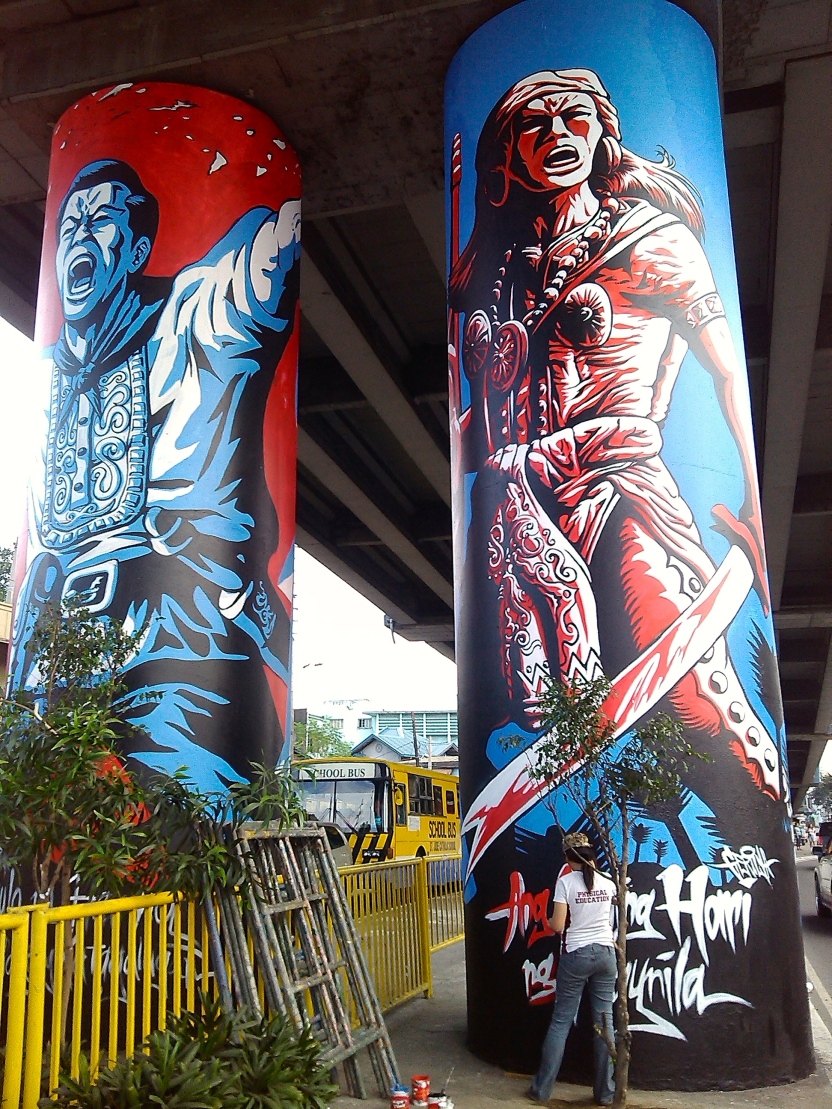 “Pundasyon (Ang Supremo at ang Rajah)” by Gerilya, the mural shows a portrait of Rajah Sulayman, the pre-Hispanic King of Manila

The mural “Pundasyon” which translates to “Foundation” is found on 20-meter high underpass columns in Nagtahan Bridge, Metro Manila as part of the Urban Artscape Project. Ten columns were painted with Filipino narratives that features revolutional heroes and historical leaders.

Manila is known to be one of Philippines’ highly urbanized and most populous places. The city has been changing its tune on public art recently, taking on a number of beautification projects since the last decade. 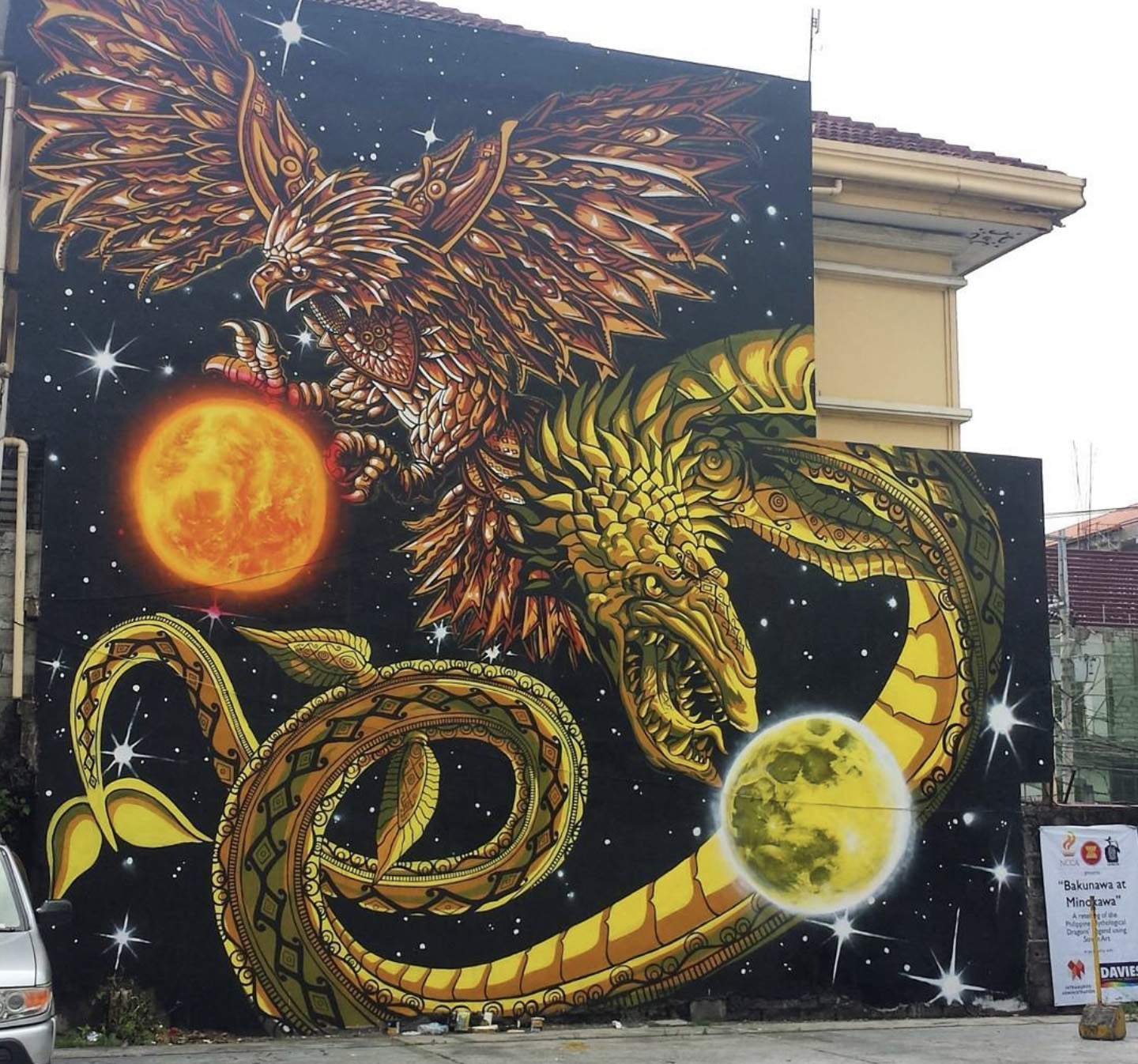 Gerilya is an artist collective formed in 2008. Its three original members, Jano, Kube, and Zap. Gerilya is involved in various art related activities and experimental ventures such as comics, street art, graffiti animation, fine art exhibitions, and illustration commissions. They seek to make their art as relevant as possible and draw influence from Philippine popular and mass culture. 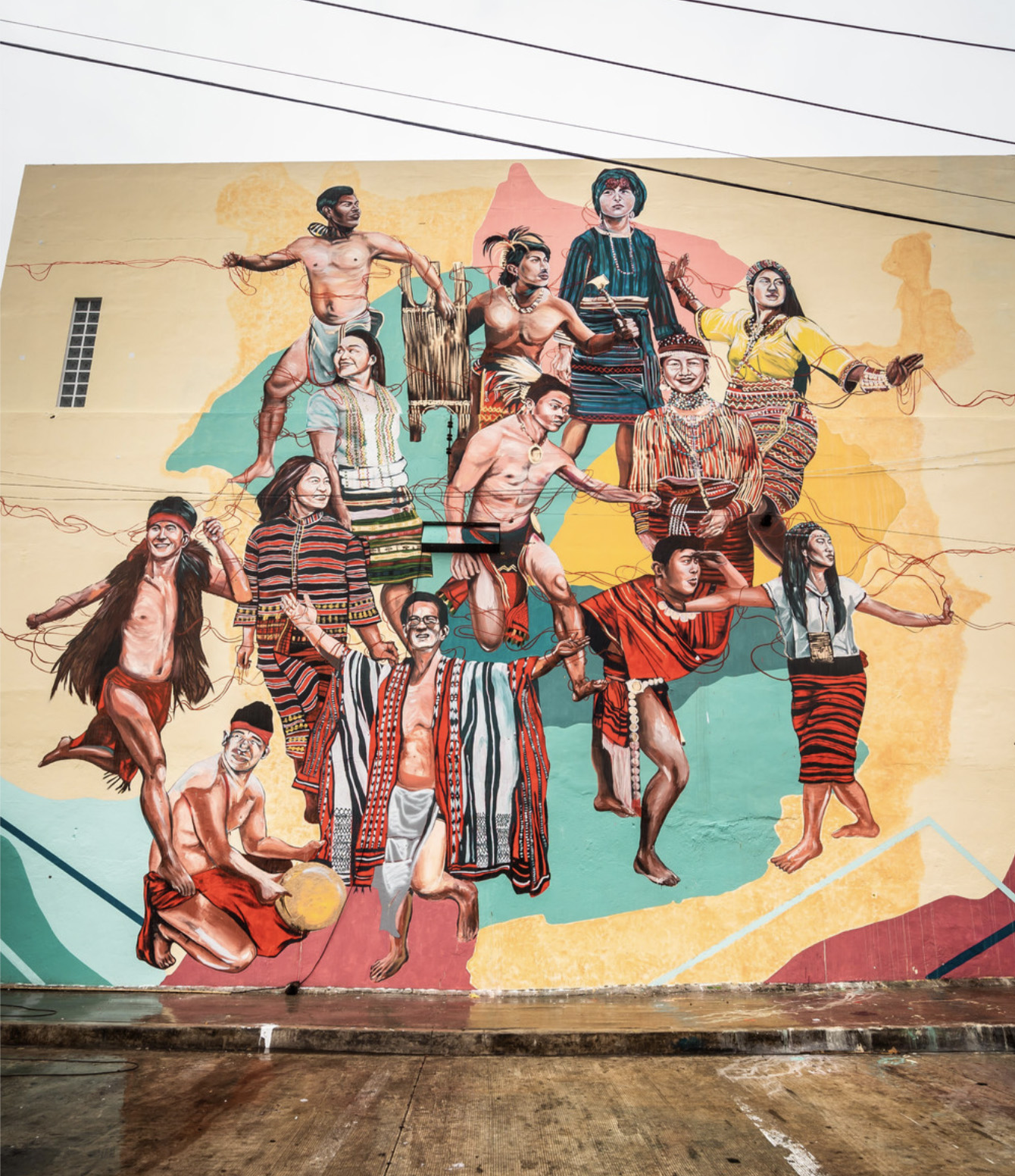 Hila-bana, means temporary stitching, unified by the red string. The mural portrays anthropological figures of the indigenous collective identities of the Cordilleras, central mountain ranges in the northern part of the biggest island of the Philippines, Luzon.

Martinez’s creative process delved into the influence of Filipino indigenous knowledge and links it with our contemporary mindset through the lenses of our multitudinous identities. Her style captures the realistic representations of indigenous peoples and customs. Simultaneously, permeated with flamboyant stratification of abstractive, delineating forms, and spontaneous over-all. 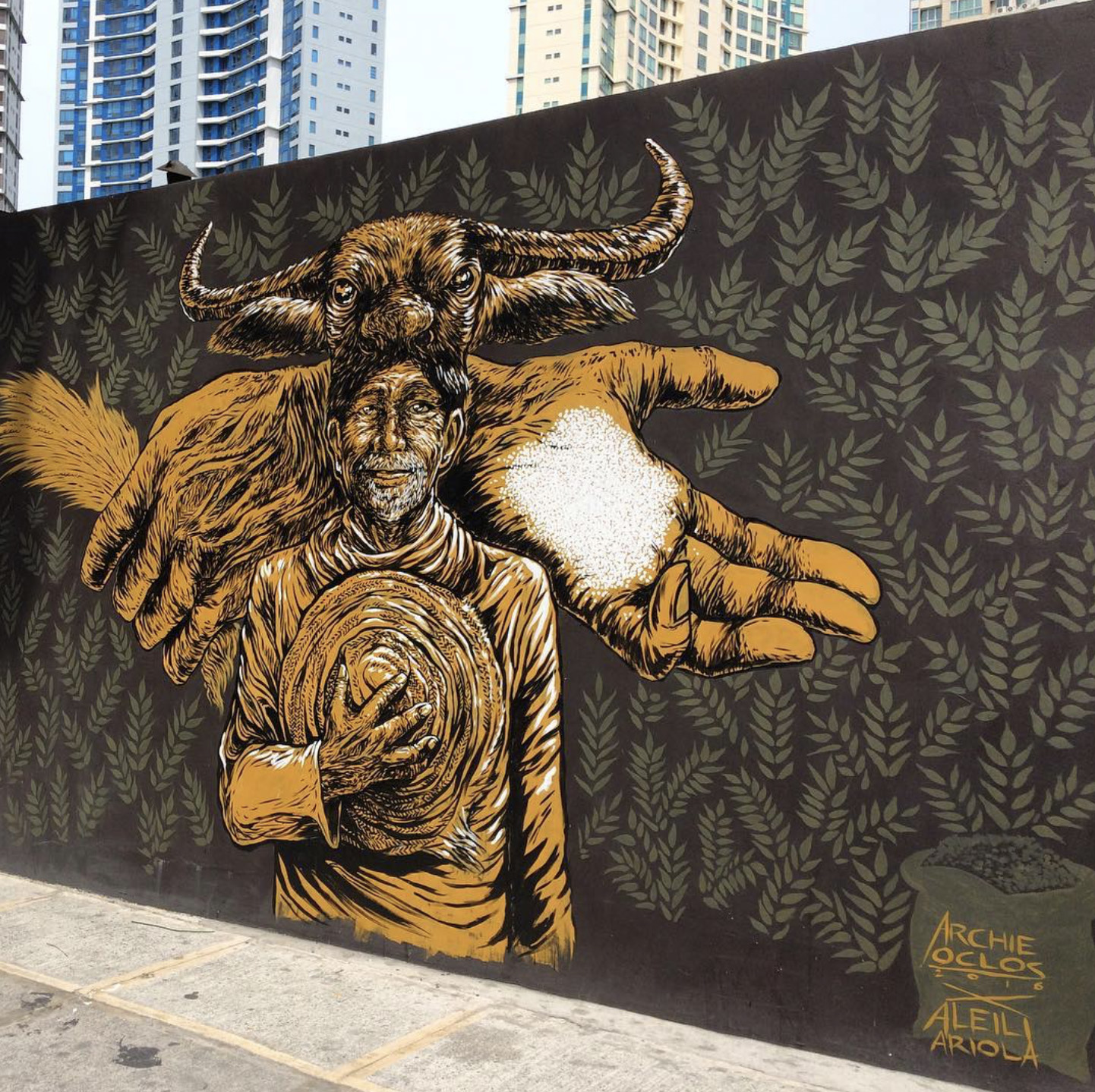 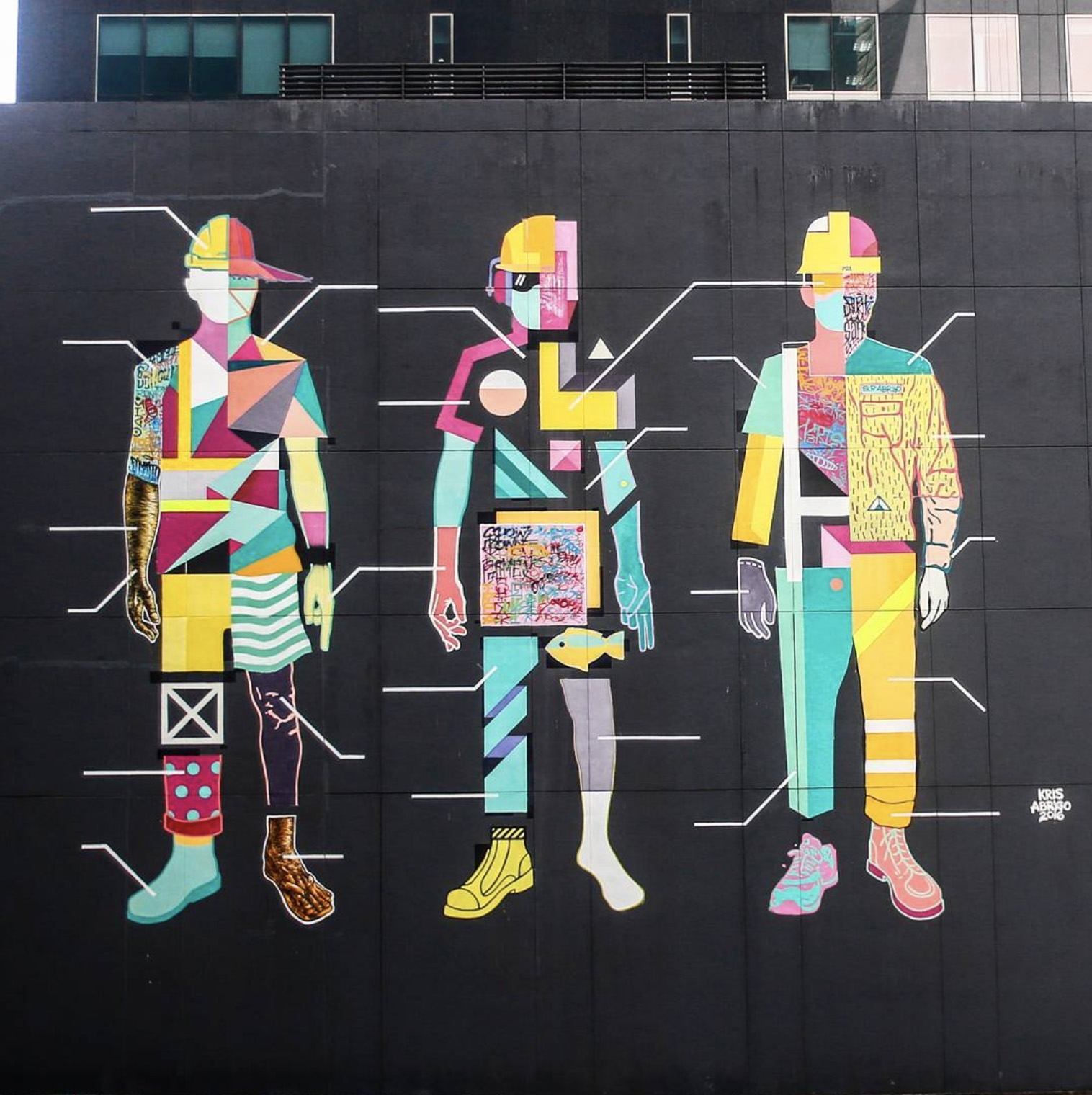 Filipino street artist Kris Abrigo has gained much visibility over the years from creating murals for commercial and residential spaces. Abrigo hopes to foster an inviting environment with his bubbly geometric forms and fun color palettes that spark younger generations’ curiosity about art. Rendered in both pastel and bright colors with acute precision on canvas or on walls, his works suggest a core sample of the new wave of urban artists around the world.

Inside The Viewing Booth, an Israel Supporter Reacts to Videos of the OccupationPoland Passes Controversial Restitution Law, Sparking Outcry – ARTnews.com