Chuck Close, a Photorealist painter who earned acclaim for his incisive portraits and more recently faced criticism after multiple women accused him of sexual harassment, has died at 81. Pace Gallery, which represents him, said on Thursday that he had died after a congestive heart failure resulting from a long illness.

“I am saddened by the loss of one of my dearest friends and greatest artists of our time,” said Pace chairman Arne Glimcher. “His contributions are inextricable from the achievements of 20th- and 21st-century art.”

Close’s large-scale painting of his artist colleagues, celebrities, politicians, and others in his orbit have been widely exhibited. They are considered key examples of Photorealism, a style associated with the late 1960s and early ’70s that involves the incorporation of photography into the painting process to create a more precise image. Close initially eschewed a connection to the movement, however, and even declined an invitation to participate in “Realism Now,” art historian Linda Nochlin’s 1968 exhibition at Vassar College’s museum in Poughkeepsie, New York. 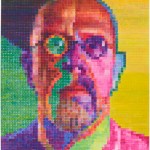 For Close, photography initially offered him the ability to remove his own subjectivity from the painterly process. “The camera is not aware of what it is looking at. It just gets it all down,” he told Artforum in 1970. “I want to deal with the image it has recorded which is black and white, two-dimensional, and loaded with surface detail.” But he was quick to point out that he was “not trying to make facsimiles of photographs.”

In Close’s most famous works, featuring figures like the composer Philip Glass and the artist Alex Katz, gigantic likenesses are rendered with an almost unparalleled precision. His paintings from the ’70s were often black-and-white and made by overlaying a grid on a photograph. Close then labored over the image to translate each square to a canvas, allowing viewers the chance to scrutinize every blemish visible on each of his subjects. Although these paintings may have appeared quite unlike most works coming out of New York at the time, Close considered his works to be in line with Conceptualism and Minimalism for their reliance on grids, systems of rules, and repetition. His later works would make those grids more visible, with the portraits becoming pixelated as time went by.

Close’s trailblazing paintings initially failed to find him an audience. The conservative-minded New York Times critic Hilton Kramer famously dismissed them, writing that they were “the kind of garbage washed up on shore after the tide of Pop Art went out,” and galleries were at one point loathe to sell his work. General opinion of Close’s work has turned since then, however, and some have called him one of the most important artists of the 20th century.

In 2017, amid a larger reckoning that impacted every cultural sector, Close was accused of sexual harassment by multiple women. In reports by the New York Times, HuffPost, and Hyperallergic, women who had visited his studio or come into contact with him described being made uncomfortable by requests that they model nude and sexually inappropriate remarks.

In a Times interview, Close acknowledged having a “dirty mouth,” but denied having offended anyone. “Last time I looked, discomfort was not a major offense,” he said. After the Times report was published, the National Gallery of Art in Washington, D.C. indefinitely postponed a planned Close show.

Charles Thomas Close was born in 1940 in Monroe, Washington. At a young age, he began to suffer in school; only later on did he realize that it was because he had dyslexia, which at the time was not a disability that many were aware of. He found that he could excel as an artist, however, and his parents fostered that interest.

Close’s artistic breakthrough came at a young age, when he saw a Jackson Pollock painting at the Seattle Art Museum. “I was absolutely outraged, disturbed,” Close told the Brooklyn Rail in 2008. “It was so far removed from what I thought art was.” He later attended the University of Washington in Seattle as an undergraduate and Yale University as a master’s student. At Yale, Close worked alongside Richard Serra, Jennifer Bartlett, Brice Marden, and Nancy Graves, all of whom came to define the New York art scene alongside him during the ’70s.

Big Nude (1967–68) marked Close’s first experiment with his now-famous process. In it, a reclining woman is shown atop a piece of fabric. This is not an idealized nude, however—Close left her intense tan lines intact. At more than 21 feet long, Close made a work on a scale that was at the time reserved almost singlehandedly for Abstract Expressionist styles, which were at the time still considered the paragon of art-making.

To construct his portraits, Close made sure that he worked in a way which differed from most painters in the U.S. He relied on very little paint and enlisted unconventional materials, like razors and airbrushes, in his process. “In order to come up with a mark-making technique which would make painting information stack up with photographic information, I tried to purge my work of as much of the baggage of traditional portrait painting as I could,” he said in the 1970 Artforum interview.

Some have considered Close’s works to be related to his prosopagnosia, a condition more commonly known as face blindness. Though he initially did not intend his works to aid in his attempts to remember faces, he later realized that his painting practice helped. “I can remember things that are flat, which is why I use photography as the source for the paintings. With photography, I can memorize a face,” he told the artist Lisa Yuskavage in 1995. “Painting is the perfect medium and photography is the perfect source, because they have already translated three dimensions into something flat. I can just affect the translation.”

During the ’80s, Close switched up his working methods, resulting in images that looked less like their photographic sources. For one 1982 portrait of his daughter Georgia, for example, he pushed paper pulp through cake decorators. Unlike the lucid paintings Close had produced of Glass and Katz, this one is filled with circular forms that coalesce to form her image. Color, too, was added to Close’s paintings in this era.

In 1988, Close suffered a collapsed spinal artery that left most of his body paralyzed, but he continued to work for decades afterward. In the years since, his fame has only grown, and along with it, a host of touted figures have been depicted in his work, from former U.S. President Bill Clinton to artist Kara Walker.

In 2013, Close was told he had Alzheimer’s disease, and in 2015, that diagnosis was changed to dementia. With the prospect of his nearing passing, Close began to paint more self-portraits.

“I always have at least one self-­portrait in each show, but usually no more than one,” he told the New York Times Magazine in 2016. “And then, with the last show, there were a lot of self-­portraits, and I’ve only done self-portraits since then. I think I’m having a conversation with myself. Facing death, or whatever the hell it is. I think it comes out of my diagnosis and not knowing how long I have.”