Kaari Upson, a Los Angeles–based artist whose work hints at eerie forms of loss and twinning, has died at 49. Margot Norton, a New Museum curator who organized a 2017 solo show of Upson’s work, announced the news on Instagram on Thursday, saying that the artist had died of metastatic cancer on Wednesday.

“Kaari was a force of nature and a beautiful human being,” said Jay Jopling, the founder of White Cube gallery, which represents Upson. “Her work powerfully skewered the fallacies of the American dream.”

Upson’s sculptures, videos, and performances have been seen widely in world-class biennials and major solo shows over the past decade. They enlist inanimate objects, often ones associated with home decor and architecture, to render absent figures mysteriously present. Tattered and sometimes slightly decrepit, her sculptures conjure the unseen people who once owned them. 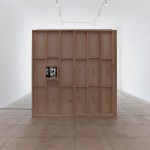 For much of her career, Upson undertook an ongoing body of work known as “The Larry Project.” Begun in 2007, the series stemmed from a 2003 fire that nearly consumed the McMansion next to her family’s San Bernardino home. Intrigued by the dwelling she had never entered but had long seen from afar, Upson went into the charred house after the fire and began to document it, in an attempt to envision a life for its owner, whom she had never seen inhabit the structure. Upson has never revealed that owner’s name, though she called him Larry and described him in a Los Angeles Times profile as being a “poor man’s Hugh Hefner,” referring to the founder of Playboy magazine.

From there, Upson’s work grew in scale and ambition. For one project, she cast sex workers as twins—an allusion to Hefner’s identical twin girlfriends—and began filming them. That video appeared in a massive structure called The Grotto (2008–09), which is now owned by the mega-collecting Rubell family.

Kaari Upson was born in San Bernardino, California, in 1972. She attended the California Institute of the Arts (CalArts) for both her undergraduate and graduate degrees, receiving her B.F.A. in 2004 and her M.F.A. in 2007. Early on, her piquantly odd evocations of people in highly present objects brought her a number of admirers, including curator Ali Subotnick, who organized Upson’s first institutional show at the Hammer Museum in 2007, months after the artist completed her M.F.A.

In 2017, Upson had one of the biggest moments of her career when she had work on view at two major New York venues concurrently. At the Whitney Biennial that year, as part of a larger project focused on tract homes in Las Vegas, she showed pieces of a couch that had been torqued into a nearly unrecognizable shape. In the exhibition, some pieces of the sectional were mounted to a wall, while others were strewn around a gallery like wreckage and turned on their sides. The sofa had been found by the artist in Las Vegas, and was transported to her studio, where it was exposed to the elements and then repeatedly cast in urethane. “There’s something that might look like a human stain on this furniture,” she said in a video produced for the Whitney’s website.

Meanwhile, downtown, Upson filled a floor of the New Museum with an array of works that brought together a disparate set of interests: Pepsi, mothers, crocodiles, and psychoanalysis. They alluded to Upson’s own mother, who had a habit of drinking soda daily. As part of the series “MMDP (My Mother Drinks Pepsi),” begun in 2014, Upson clandestinely filmed herself in Costco among boxes of soda cans. In some shots, she showed herself seated atop these seemingly endless boxes, as though they were a throne.

Also in 2017, Upson was included in the Istanbul Biennial, and two years later she appeared in the 2019 Venice Biennale. That year, she also had solo shows at the Kunstverein Hannover in Germany and the Kunsthalle Basel in Switzerland. Earlier this year, Massimo De Carlo gallery, which represents the artist alongside White Cube and Sprüth Magers, presented a single work by her at its Paris space, and her work is currently on view in a major survey of art about motherhood at the Louisiana Museum of Modern Art in Denmark. (Before she was taken on by some of the world’s top galleries, enterprises like Ramiken Crucible in New York and Overduin and Kite in Los Angeles offered Upson her first exhibitions.)

If Upson’s works are often oblique, that was the artist’s intention. She describes them as “open narratives.”

“There’s no beginning, middle or end in the work,” she told the Art Newspaper in 2017. “It could be the end of something that I’m not even recognizing the line of, but then the beginning of something else that I don’t even know is about to happen.”