Visa acquired an NFT by Larva Labs for 49.5 ETH, or about $150,000, for the company’s collection on August 19, signaling a major entry into the NFT market by the financial services firm.

Titled CryptoPunk #7610, the NFT is part of a series known as “CryptoPunks,” considered one of the first NFT projects ever launched. “CryptoPunks” comprises some 10,000 pixel portraits with randomly mixed traits and accessories. Visa bought one featuring a female punk who sports a mohawk, lipstick, and green eyeshadow.

Cuy Sheffield, head of crypto at Visa and an avid collector of NFTs himself, said that Visa purchased the CryptoPunk to show that it would not shy away from taking part in an ascendant sector of the art market. In an email Sheffield wrote, “Our excitement about this project is less about any individual Punk, and more about the CryptoPunk collection as a whole and what it represents—the beginnings of a new chapter for digital commerce. This is just the beginning. We’re eager to continue building our NFT collection and to support the diverse group of artists and creators working in this space.” 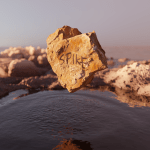 Sheffield, whose own NFT collection mostly features Black digital artists, has previously written about the potential of NFTs for Black economic empowerment.

Cuy believes that the NFT market will need banks to mediate between NFT creators and larger audiences, writing, “For NFT-commerce to become mainstream, NFTs should be as easy to purchase as traditional e-commerce experiences where consumers can leverage their existing Visa cards at the checkout instead of having to purchase a cryptocurrency first to buy their NFT.”

Some within the crypto community greeted Visa’s move as a validation of their intense interests FaZe Banks (@Banks), a crypto guru with almost 3 million followers on Twitter,  who tweeted in response to the news: “I have been doubted, made fun of and straight up shit talked for the last 6 months because of the amount of time effort and money I’ve put into NFT’s. Visa buying a Crypto Punk feels like a dream. Am I still crazy?”

CryptoPunks tend to already enjoy a degree of mainstream success, and have been offered for sale on multiple occasions by auction houses like Christie’s and Sotheby’s. Visa’s influence can already be seen in the sudden demand for CryptoPunks. CoinDesk, a crypto-focused news site, reported that an hour after Visa’s announcement, 90 CryptoPunks were bought. By the early afternoon, 203 more of them were purchased.