Unfinished artworks often have an aura of mystery surrounding them. Were the works left incomplete by accident, or was it an intentional choice on the part of the artist?

Thanks in large part to artists such as Leonardo da Vinci and Michelangelo — both of whom left many paintings incomplete — it became fashionable throughout the 16th century for artists to leave works unfinished. A name was even given to the style: non finito—an Italian term describing the intentional unfinishing of a work of art. Alternatively, many artists began projects with the best intentions but failed to complete their compositions due to unforeseen circumstances. In either case, a work of art left in its unfinished state can captivate audiences for hundreds of years.

So intriguing are unfinished works that entire museum exhibitions have been devoted to their stories. Unfinished: Thoughts Left Visible, a 2016 exhibition at New York’s Metropolitan Museum of Art, featured more than 190 unfinished works dating from the Renaissance to the present day and provided insight into each artist’s creative process. Here, we uncover some of the most iconic unfinished paintings, buildings, and books, and the reasons why each was abandoned. 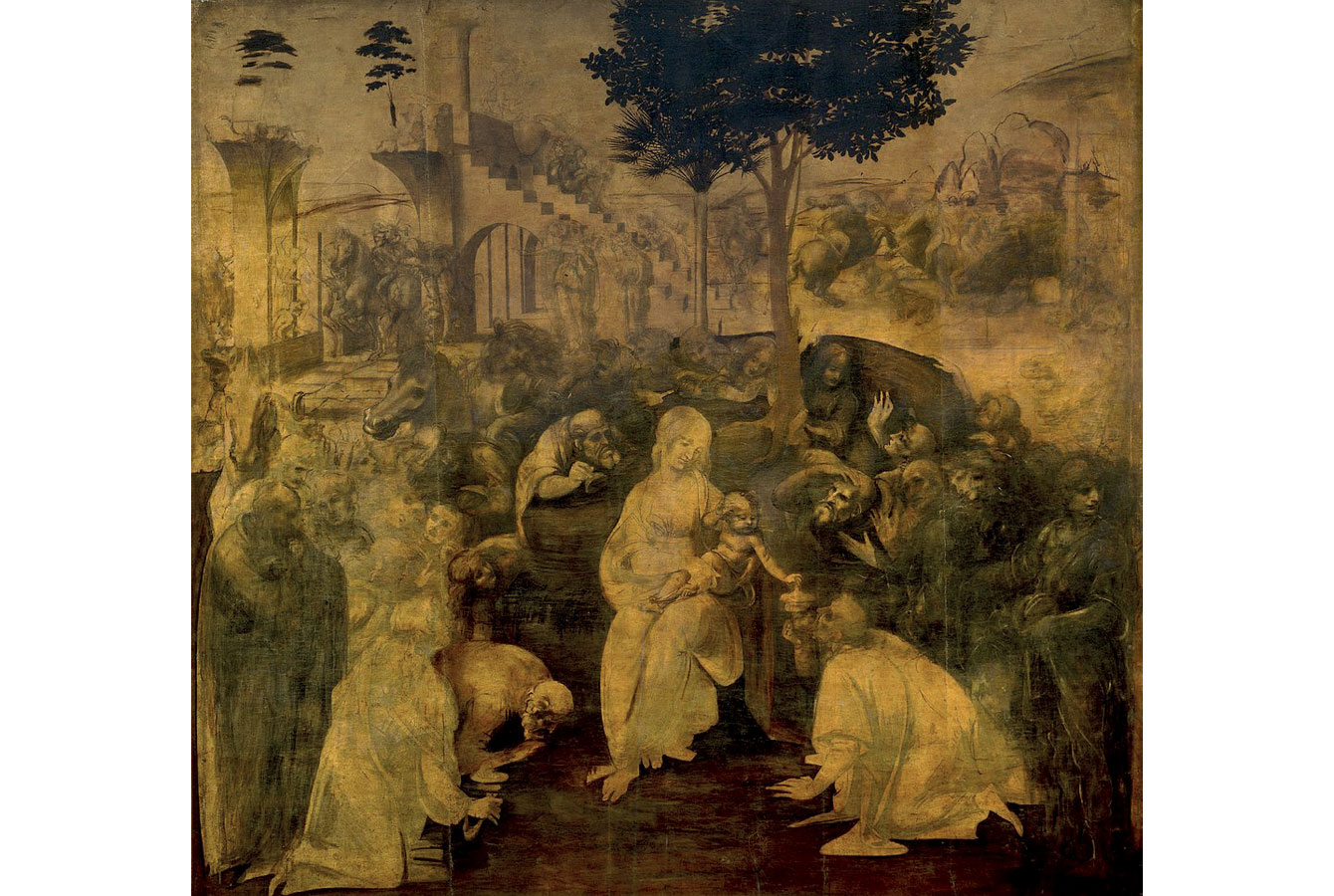 Art historians have lovingly referred to Leonardo da Vinci as a “brilliant slacker.” He was well-known for abandoning projects when he became disenchanted or was otherwise sidetracked with other projects in engineering and science.

In 1481, da Vinci was commissioned by Augustinian monks to paint The Adoration of the Magi, which depicted the Biblical tale of the (Three) Wise Men’s arrival to meet the baby Jesus. Within a year, da Vinci had created a life-size draft that spanned over seven square feet. Soon after, in 1482, the artist’s work captured the interest of the Duke of Milan, Ludovico il Moro, who commissioned da Vinci to paint The Last Supper. The Adoration of the Magi was recommissioned and repainted by Italian painter Filippino Lippi, and both versions are still on display at the Uffizi Gallery in Florence, Italy.

The Entombment is one of the most mysterious unfinished paintings. The painting depicts the body of Jesus Christ being placed inside his tomb after crucifixion, but with several figures missing from the composition. With no signature on the piece, it is still unclear whether Michelangelo actually painted the work; however, it is generally understood that he was the artist given that he was commissioned by the Saint Agostino church in Rome to paint a panel for their altar. Michelangelo returned the money and left for Florence around the time this painting was abandoned.

The Entombment resurfaced in 1846, when Scottish painter and photographer Robert Macpherson found a piece of the painting that was about to be destroyed at a job lot. He bought it for approximately one dollar, and later sold it to the National Gallery of Art in London for close to $3,000.

Italian virtuoso Parmigianino worked in Mannerist style, which featured elongated and exaggerated proportions to suggest beauty and grace. He was commissioned to paint a picture of Mary and Jesus for a funeral chapel. Though he came up with several drafts, the painting was left unfinished when the artist died of a fever in 1540. His perfectionist mindset led to several incomplete versions. In Madonna with the Long Neck, the columns, sky and other areas of the painting are visibly unfinished, and a floating foot sits next to the figure of Saint Jerome.

British painter Benjamin West was hired to commemorate the end of the American Revolution by painting the French, Spanish, Dutch, British, and U.S. delegates discussing the Treaty of Paris. The assembly resulted in the independence of the original thirteen American states and the release of prisoners of war. British delegates refused to pose for the work as they felt their defeat was shameful. As a result, the painting features a large, blank space where the British soldiers would have been. Today, the painting is housed in the library of Adams National Historical Park in Massachusetts. 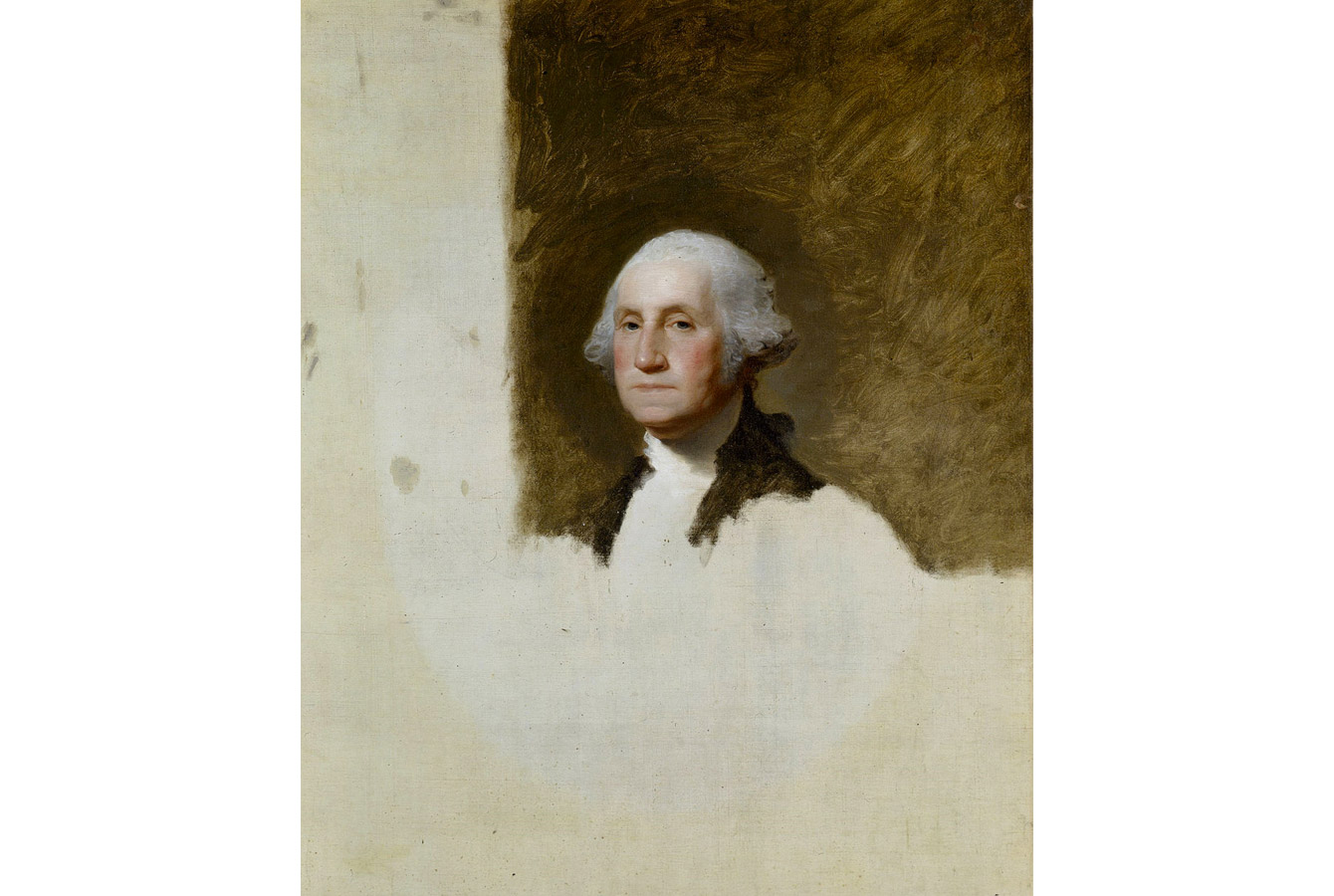 American painter Gilbert Stuart is considered one of the most respected portrait artists of his day, having painted the likeness of over a thousand sitters, from presidents to royalty. In 1795, he painted a portrait of George Washington that was an immediate success, so much so that Washington’s wife, Martha, asked the artist to paint another in 1796. After completing just the face and part of the background, Stuart intentionally left the painting as it was, believing it would build more intrigue. A smart businessman, he made dozens of copies of the unfinished work and sold each for $100. It is this likeness that is used on the United States dollar bill note to this day.

Geoffrey Chaucer spent over a decade writing The Canterbury Tales, from 1387 until his death in 1400. He describes 27 pilgrims in the General Prologue, each of whom was supposed to tell two tales on the way to Canterbury, and two on the way back. Though the English poet and author intended to write over a hundred tales, a collection of only 24 stories made it into his book.

Chaucer’s death prevented him from resuming the framing device at the end of the pilgrims’ journey, so the reader never finds out who wins the storytelling contest. Because the manuscripts weren’t completely finished, different versions of The Canterbury Talesaim to complete various fragments. As a result, there are several variations on this classic work, and sometimes stories don’t appear in the same order between editions.

English writer and philosopher Mary Wollstonecraft crafted the gothic novel Maria: or, The Wrongs of Woman as a sequel to her political treatise, A Vindication of the Rights of Women (1792), which conveys feminist ideologies. The 1798 piece centers around Maria, a woman imprisoned in an insane asylum by her husband, serving as a criticism of what the author considered to be a patriarchal institution (marriage) during that time in Britain.

The feminist advocate died days after giving birth to her daughter in 1797, and was thus unable to finish her final novel. Her husband, William Godwin, published the work posthumously in 1798.

Wives and Daughters was first published as a feature in The Cornhill Magazine in 1865 and was later published as a book in 1866. Though unfinished at the time of her death in 1865, it is Gaskell’s last, longest — and largely considered to be her finest — work, detailing the interlocking fortunes of several families in a provincial English town in the 1830s. The final chapter is written by her editor, Frederick Greenwood, who sketches the ending according to what he believed to be the author’s intentions. 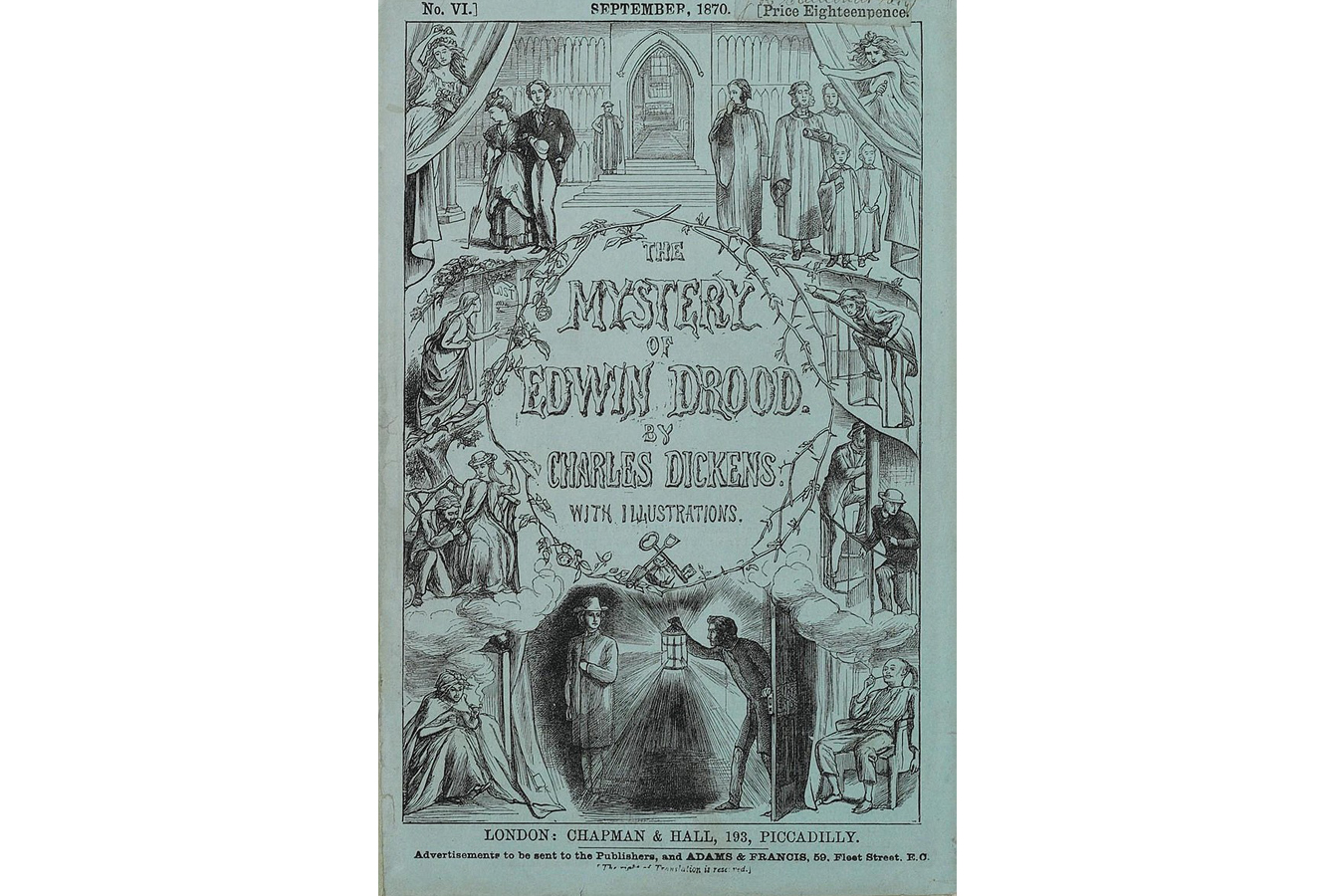 Known for his novel A Tale of Two Cities, English writer Charles Dickens’ most intriguingly ambiguous work is undoubtedly The Mystery of Edwin Drood. Originally published in 1870, the novel recounts the story of a troubled romance between Drood and the character Rosa Bud. Dickens finished only six of a planned twelve installments before he died. As such, the audience never finds out why Drood vanishes partway through the story.

Celebrated English novelist Jane Austen started Sanditon in 1817, finishing eleven chapters before she passed away the same year. The book was initially called The Brothers, but was later titled Sanditon upon first publication in 1925. The unfinished novel tells the story of the spirited and unconventional Charlotte Heywood and her relationship with the charming Sidney Parker.

The last text in Austen’s manuscript reads, “Poor Mr. Hollis!—It was impossible not to feel him hardly used; to be obliged to stand back in his own House and see the best place by the fire constantly occupied by Sir H. D.” So well received was the unfinished narrative that it is being turned into a drama series by acclaimed screenwriter Andrew Davies.

Ta Keo Temple is one of the main temples within the Tha Angkor Temples of Cambodia. It is the only building in the complex made entirely of sandstone and was never fully realized due to political instability around the time of its construction in 1001 B.C. While other Hindu temples feature intricate detailing, carvings, statues and other ornamentation, Ta Keo Temple remains pared-down in structure and detail. 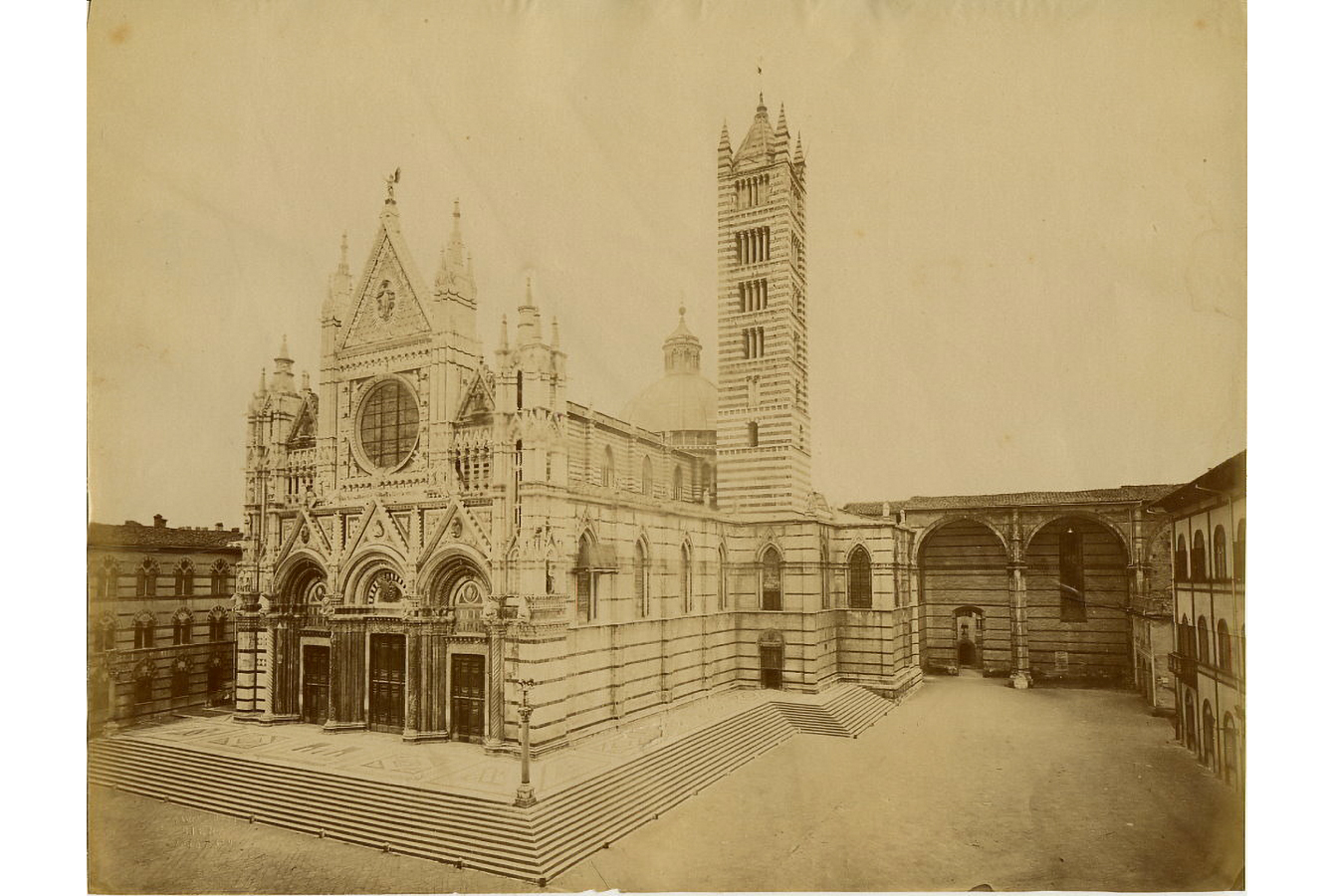 Though this outstanding Gothic cathedral was officially completed in 1348, it was expected to be twice its size. An expansion project that began in 1339 was never finished due to the rapid onset of the Bubonic Plague in 1347. Construction never resumed and, to this day, there are parts of the Siena Cathedral that showcase its abandoned expansion—including unfinished exterior walls and a partially-built floor that now supports a museum and parking lot.

Though unnoticeable to the public eye, the final construction of New York’s Metropolitan Museum of Art does not represent its initial concept. In an attempt to update the archaic Gothic style of the building, the museum commissioned Richard Morris Hunt to redesign its Beaux-Arts facade. Construction was suspended during the financial crisis of 1901, but was reinstated and completed in 1903. During the pause, columns were capped with stacked pyramids of limestone that were intended to be carved into allegorical figures representing the disciplines of sculpture, painting, architecture and music. Once the project resumed, the column decoration was abandoned. Raw stone still rests atop the pillars today. 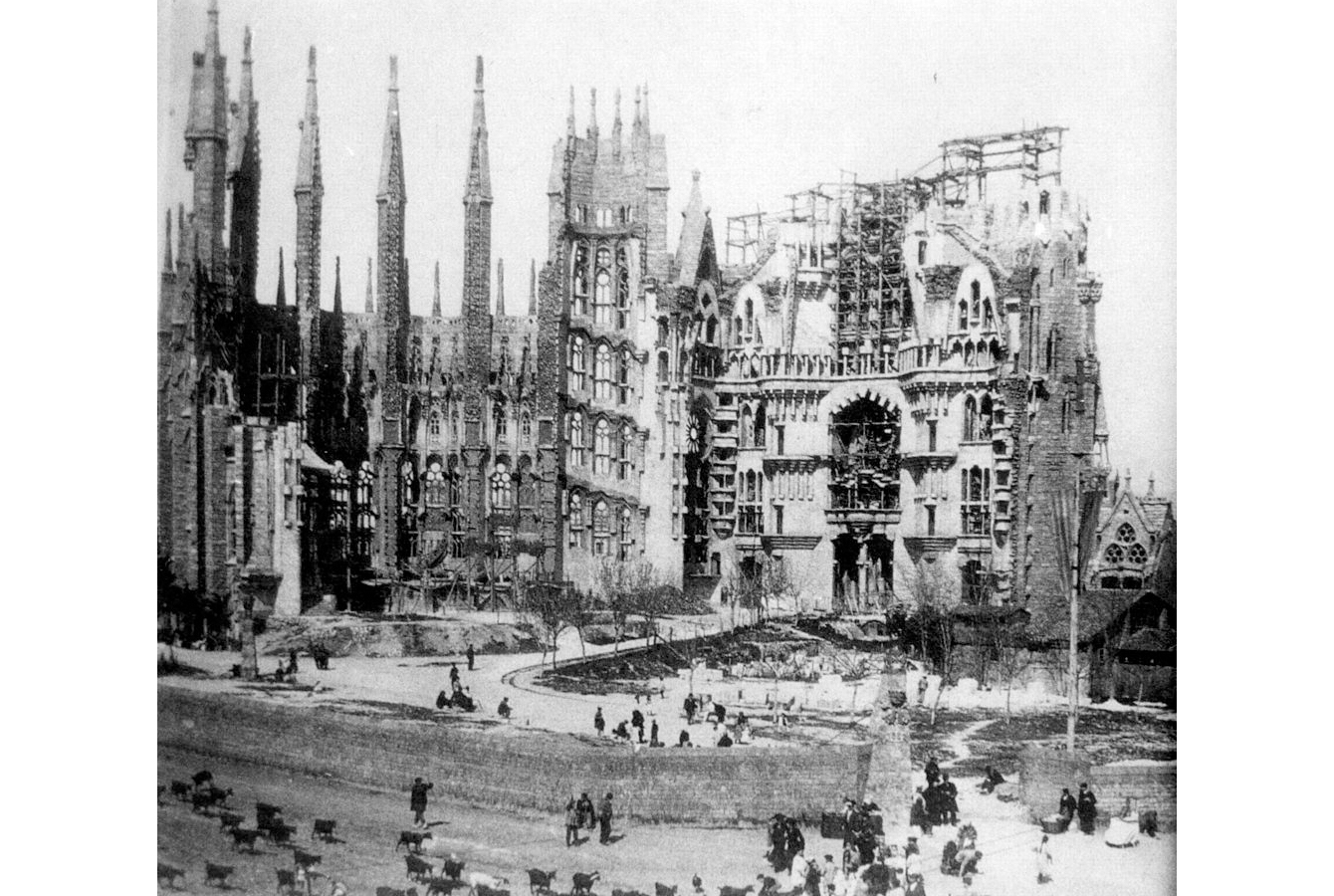 La Sagrada Familia is one of Spanish architect Antoni Gaudí’s monumental creations. Construction began in 1882, and Gaudí took control of the project a year later, reshaping the design. The Roman Catholic church was only partially finished before the architect’s death in 1926. Construction came to a halt during the Spanish Civil War in the 1930s, and the architectural plans were lost when the artist’s workshop was destroyed.

Construction is ongoing, and though it will have been in development for over a century when it is finally finished (expected in 2026), the final design will reflect contemporary adaptations of Gaudí’s initial plans.

Throughout the 1930s, Moscow was a mecca for modern architectural projects. Under Stalin’s rule, a palace design contest was held in 1931 and the winning design boasted extravagant plans. Construction began in 1938, but was put on hold during the second World War. What was originally intended to be a building so tall that it reached the clouds — complete with a 328-foot-high statue of Vladimir Lenin — was fully scrapped by 1957 after only the foundation had been laid.