One of the art world’s many clichés was invoked on Friday just after Vanity Fair announced that Art Basel’s former director for the Americas, Noah Horowitz—whose role was to pitch, cajole, placate, vet, and advocate for galleries—would be joining Sotheby’s in September as its worldwide head of gallery and private dealer services. The reaction was a little overwrought. There were tweets about “collapsing categories in the industry” and claims this was another example of an “auction houses muscling even more dramatically into dealer space.” Vanity Fair itself combined heaven and earth into a mixed metaphor to call the personnel move, “a seismic shift in the whole art world firmament.” 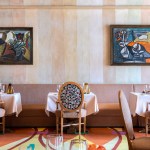 That auction houses and dealers are mortal enemies—a biblical lion and lamb—who might be able to coexist only in some idyllic peaceable kingdom is one of those ideas that hardly stands up to scrutiny. But the move by Sotheby’s does illustrate some important and unexpected changes the pandemic has brought to the art market. The endless rounds of art fairs that everyone previously complained about have been curtailed for almost two years. Yet everyone expects the top fairs, especially Art Basel, to resume a central role in the future.

What’s changed is not that art fairs have been diminished but that the auction houses built broader sales and marketing platforms in the years leading up to the pandemic, which have turned out to be effective at serving a large new audience for art. In the first half of 2021, all three global auction houses posted their strongest sales figures since the last market peak in 2015, with some firms seeing new customers make up nearly a third of buyers.

Art galleries, too, were able to weather the pandemic better than most expected. Anecdotal tales have sales volume strong, as collectors sit on piles of accumulating cash with few opportunities to spend. Dealers have been able to remain engaged with the customer base. Even if sales have diminished during the lockdowns—by as much as 20 percent, according to some estimates—the drop in expenses, like those associated with traveling to art fairs, has more than made up for the shortfall.

Common business sense would tell most dealers that the experience of the last 18 months suggests they might want to rethink how they spend their marketing budgets. At bottom, art fairs are customer-acquisition line items. Here’s where Horowitz and Sotheby’s see an opportunity.

“Sotheby’s has long worked with dealers,” Horowitz says, explaining his new role. But “there’s no consolidated department dedicated to servicing the gallery community within Sotheby’s.” Anyone paying attention during the first few months of the pandemic would have seen overt acts by Sotheby’s to partner with dealers, like when it launched Sotheby’s Gallery Network, a way for galleries to showcase their exhibitions on the auction house’s highly trafficked website.

During the first wave of online sales during the lockdown, many lots being sold were coming out of dealers’ stockrooms. With galleries shuttered and art fairs postponed, online auctions became the only source for the cash many assumed they would need to survive the uncertain path ahead.

“We were able to work very well with galleries during the pandemic as many established ways of doing business became challenging,” says Brooke Lampley, Horowitz’s new boss at Sotheby’s. “We could reach people when they couldn’t.”

Once the auction houses launched their hybrid sales, the art world somewhat forgot that early phase, which was just 15 months ago. But under the ownership of Patrick Drahi, Sotheby’s has continued to look for ways to migrate beyond the auction business. The company has a huge wingspan that often gets overlooked because of the emphasis on auctions. The new team running the firm seems to recognize that the infrastructure they’ve built can be repurposed to offer sales as a service.

“I think we can create an interesting custom-fit platform to service galleries and private dealers in a very mutually supportive way,” Horowitz says. He points to several channels that Sotheby’s has developed that would benefit primary and secondary market galleries. Auctions are one obvious route, and it makes sense for Sotheby’s to set up a single point of contact for dealers who might want to consign.

Sotheby’s has developed a few important capabilities that Horowitz is hoping to tap for the benefit of dealers. “Sotheby’s international salesforce is much larger than any individual gallery’s,” he says. With the right terms, dealers should be able to sell works that they might not be able to place on their own.

Given Sotheby’s reach, the buyers are likely to be new to the gallery. From there it will be up to the gallery to develop a relationship with the buyer. Through these efforts, Sotheby’s has become a significant demand generator. What the company lacks is supply to meet the new level of demand.

Sotheby’s private sales division viewed the pandemic as an opportunity to experiment with pop-up sales venues in places like Aspen, Monaco, Palm Beach, and the Hamptons. Sotheby’s says those pop-ups are generating sales. Art from Horowitz’s gallery network could help expand the range of art in those pop-ups; or, it could help Sotheby’s rotate the stock to get more sales out of each pop-up location; or it could simply give Sotheby’s salespeople more options when a client sees a work that is close but not just the right one. The salesperson can follow up later with a more appropriate work from one of its gallery network partners.

“This should actually be a boon to mid-tier galleries,” said Lampley, “in helping them with access to capital and to leverage our selling platform to reach more clients—but also has the potential to deepen our engagement with the bigger galleries with whom we already do a lot of business.”

To say that Sotheby’s gain shouldn’t be a loss to Art Basel, or that Sotheby’s isn’t being predatory toward galleries, doesn’t mean there are not plenty of places for friction to build up between the two. A delicate balance between cooperation and competition has become a broad theme in international business these days. Sotheby’s partnership with galleries would hardly be the first example of an alliance between competitors.

When you think about, that’s really what an art fair is: an alliance between competitors to build a broader market. Instead of viewing Sotheby’s move as a predatory toward Art Basel, perhaps we should be wondering why the world’s most famous art fair has been slow to move away from the emphasis on physical fairs. Had Art Basel built the capabilities for galleries to benefit from the amplification of their combined marketing efforts in the years leading up to the pandemic, they too might be experiencing a boom today.

One of the bigger galleries clearly took the initiative. Before the pandemic, Zwirner launched Platform, an online sales site with limited inventory sourced from smaller, independent galleries, that recognizes such galleries can thrive through limited cooperation with a bigger rival.

Access to capital is another non-obvious point of cooperation here. Last year, former hedge fund executive Alexander Klabin invested in the auction house. As part of that deal, he is leading Sotheby’s financial services division, a group that previously focused on providing loans to Sotheby’s biggest clients using their art as collateral. The financing behind independent galleries is one of the art world’s biggest constraints. If Horowitz and Klabin can develop the right financial products, there’s no reason that galleries cannot benefit.

Having said all of that, success here isn’t preordained. There’s going to be a lot of hard work figuring out how to execute this strategy. Horowitz needs to build a network of gallery liaisons around the world. He will have to figure out where he can get the most traction for galleries within Sotheby’s sprawling organization. And, of course, he’ll have to figure out how to keep the peace. Success will come if Horowitz can find the right combination of consistent wins for the galleries while minimizing the inevitable points of conflict.