“I will only purchase works of art that I really love, that I think are special, and that I think will be a good investment 20 years from now.” 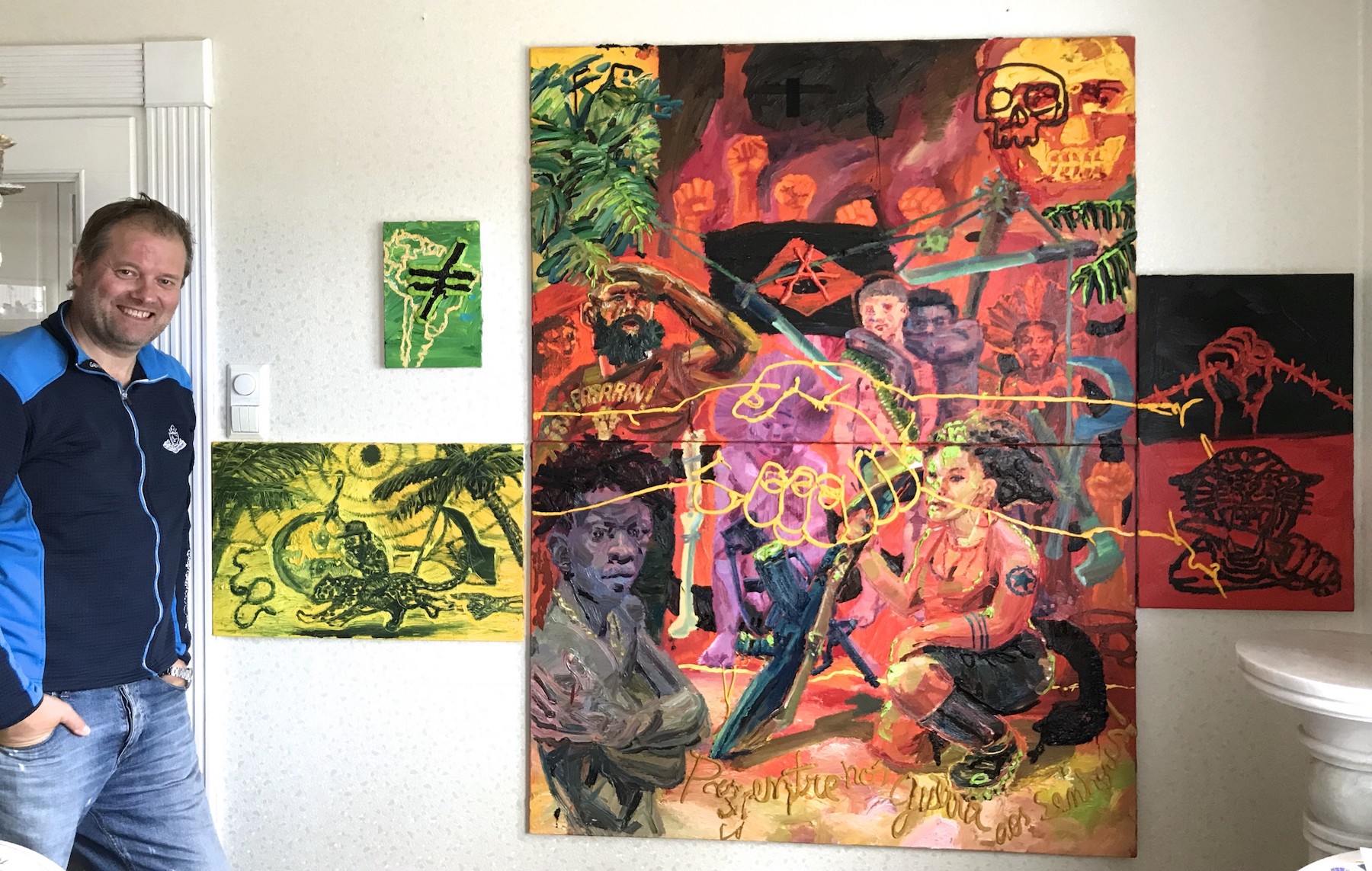 As a collector through more than 30 years, Roland Ofstad has witnessed a transformation in the art world up close, not least in his private collection, which has made quite a turn since the very first piece was added. Today, his affinity for bright works drizzled with humour shines through the collection. In this interview, he gives insights into his art journey through the web of real life and virtual art experiences.

What is your earliest memory of art, and what led you to start collecting it?
I remember how I got fascinated by the art market in the late 80s after reading a short newspaper article about some guy who had bought a Madonna motif in a flea market in Brussels for the equivalent of 10 euro. After some serious research the experts came to the conclusion that it was a Raphael worth approximately 4 million euro at the time. That really triggered my interest in art, but initially it was all about the financial aspect of it, and the idea of making millions very quickly. I soon realized, however, that  the likelihood of finding masterpieces in flea markets was minimal, but by then I had acquired an aesthetic interest in art that has not gone away since.

How would you describe yourself as an art collector?
Somewhat eclectic, but less and less impulsive. It is almost strange to see how my taste for various art forms and periods have changed over time. 30 years ago, I was very interested in classical art, perhaps spurred on by my recent financial interest in cheap Raphaels, but this was soon overtaken by an interest in more impressionist and expressionist types, like Jean-Baptiste, Camille Corot, and Edvard Munch. Then a few years later, it was Francis Bacon and Egon Schiele who caught my attention. Eventually, an interest in modern and contemporary art developed, with Basquiat still being the all-time favourite, with Munch. However, in terms of collecting none of my favourite artists were particularly accessible in terms of prices, so in the early days I had to settle for art that I found attractive or interesting, like prints of Dali and Vasarely, or landscape paintings found in various markets. In later years, I have become more focused and very recently I have started to think thoroughly about what to acquire. I have a list of 70+ artists from 20 countries on my “Wish List” and I like to do more thorough research about artists before attempting potential acquisitions. 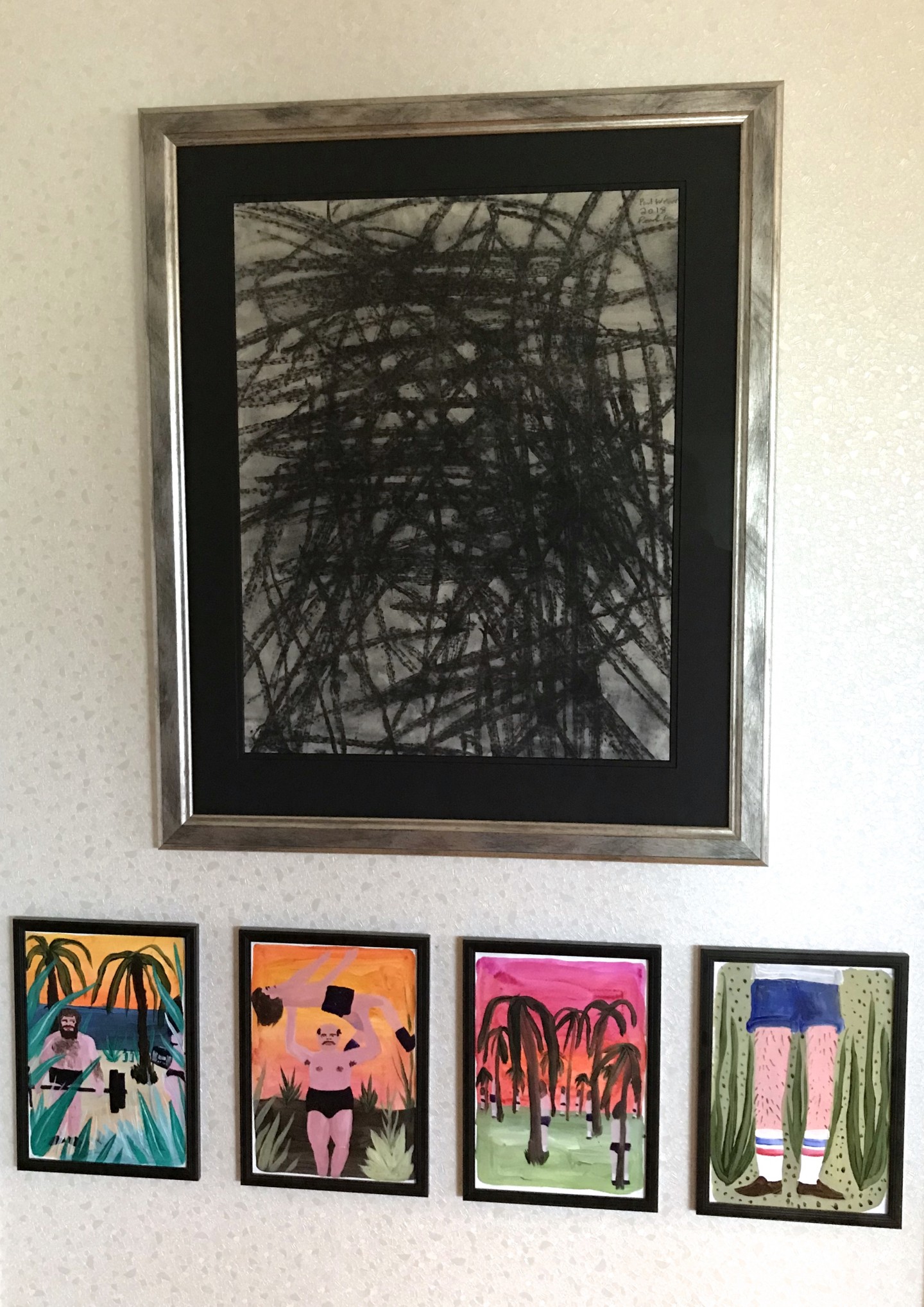 What is the main motivation behind your collecting?
In the beginning it was mainly financial, with a naïve dream of discovering a masterpiece by a world-renowned artist. That motivation changed fairly quickly, and for a while it was all about the imagery. Today it is a split motivation in the sense that I will only purchase works of art that I really love, that I think are special, and that I think will be a good investment 20 years from now.

Is there any particular type of art that appeals to you or anything that unites all the works in your collection?
Over the last few years, I have found great satisfaction particularly in naïve, awkward, contemporary art, preferably in strong colours and also, to a certain extent, in artists influenced by Basquiat. Also, surrealistic art and/or humoristic pieces will easily fit into my collection.

How important is it for you to meet the artist behind the artwork?
My contact with artists has become much more important to me with age and also as part of the research before any purchase. I find it amazing that through social media like Instagram, you can get in personal contact with artists, who earlier were only accessible through their art in galleries and museums. On my “Top 20 Contemporary Artist” list, I have had some sort of contact with 17 of them – either through Instagram or meetings in galleries. 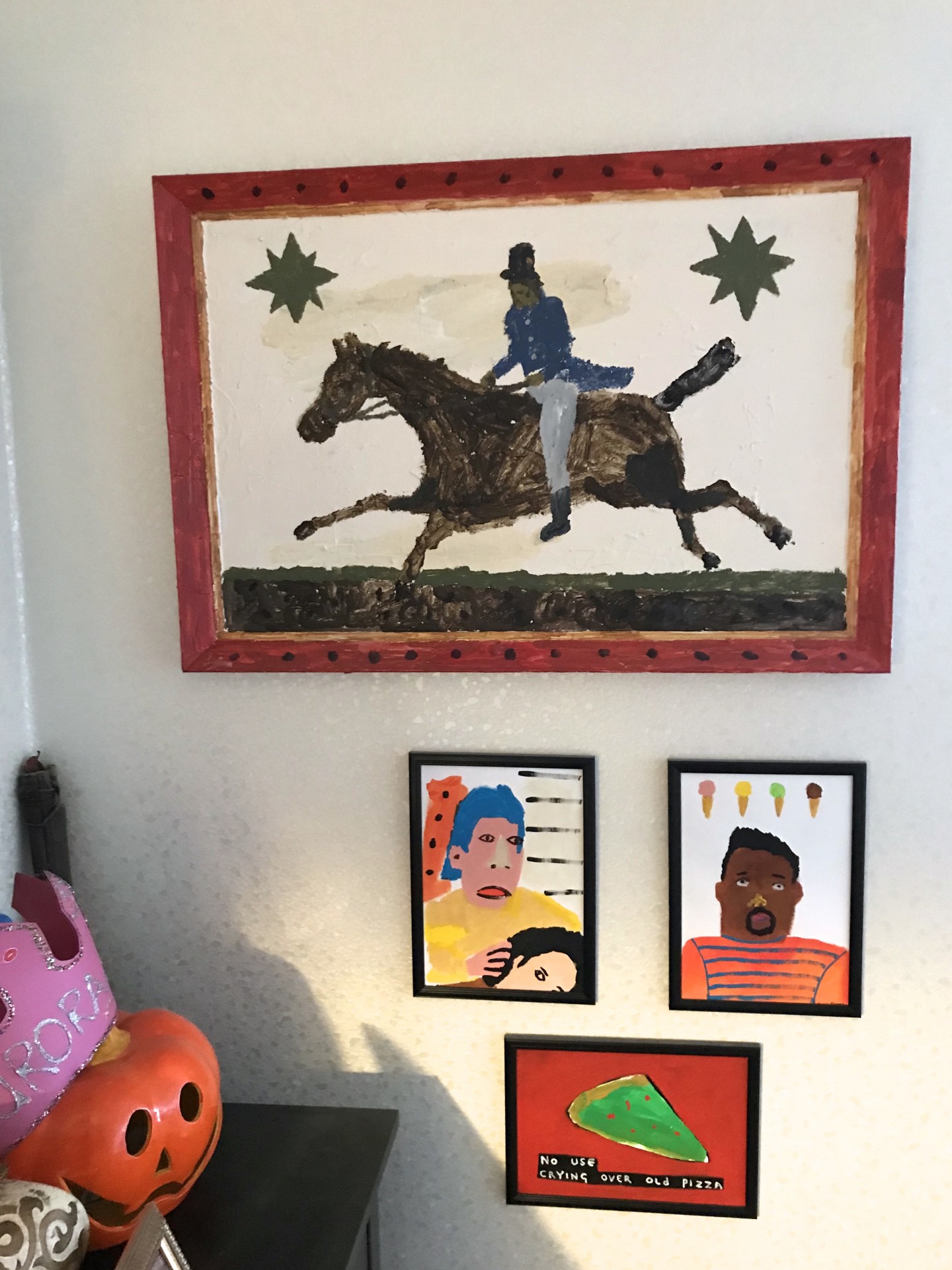 What is the most recent piece of art you added to your collection and why?
”Eastern Green Star” by Danny Fox, UK, born 1986. I ‘discovered’ DF just a few years ago, when he was the youngest artist ever to have a solo exhibition in the oldest gallery in London – Redfern Gallery. Since then he has had shows in V1 – Copenhagen, Sothebys S2 in both New York and Los Angeles and most recently in Saatchi Gallery in London. I believe it has to do with a kind of raw energy rarely seen since Basquiat, combined with influences of Gaugin, Peter Doig, and Henry Taylor that totally struck me in Fox’s paintings. This painting, of a horseback riding colonialist (presumably), was inspired by a poor housing estate called Eastern Green near St Ives in Cornwall. It is raw and awkward in style and I love it!

Has digitalization changed the way you collect art?
I would definitely say so. Not too many years ago, your local gallery was your main source of art. Now the whole world of artists is accessible through the internet and I am currently getting acquainted with a bright young artist in Lagos in Nigeria – through social media.

What or who has influenced you as a collector?
Over the years, I have visited most of the major museums in Scandinavia, UK, France, and Spain and in recent years various galleries in Europe and the US. I think the overall sheer exposure to high quality art has been very important and also one-on-one discussions with both artists and gallery owners have been influential.

Is there any specific place you always return to when you need an art fix?
Astrup Fearnley Museum in Oslo. I am not sure Norwegians understand how good their permanent collection of contemporary art is with all the masterpieces by Damian Hirst, Jeff Koons, Richard Prince, Christopher Wool, Bjarne Melgaard, and Thiago Martins de Melo, etc.

The art market has a reputation of being a playground for the elite. What is your experience of this?
That is probably correct, and I think being a multi-millionaire would have been highly beneficial when making inquiries regarding the top artists at top galleries. At the same time, this mysticism about how these things work and the stratospheric prices that certain artists obtain is highly fascinating, and I think it fuels some of the lower segments and inspires new generations of emerging artists. This is also where someone like myself comes in, where I might be able to spot a huge talent and perhaps purchase a work of art before price levels rise above my budget. That is a thrilling aspect of the whole collection business! I would also like to say that the gallery owners that I have had contact with have been very polite and helpful even though I do not fit into the elite category.

Where do you think the future of the art market is headed?
Difficult to say. On the one hand, there is a tendency that smaller galleries struggle and quite a few close down. On the other hand, the emergence of quality internet sites like Artland makes the art market more and more accessible for new and seasoned collectors alike. Nevertheless, I hope that there will be a foundation for co-existence for both the primary gallery market; the secondary auction market, and the new electronic platforms going forward. 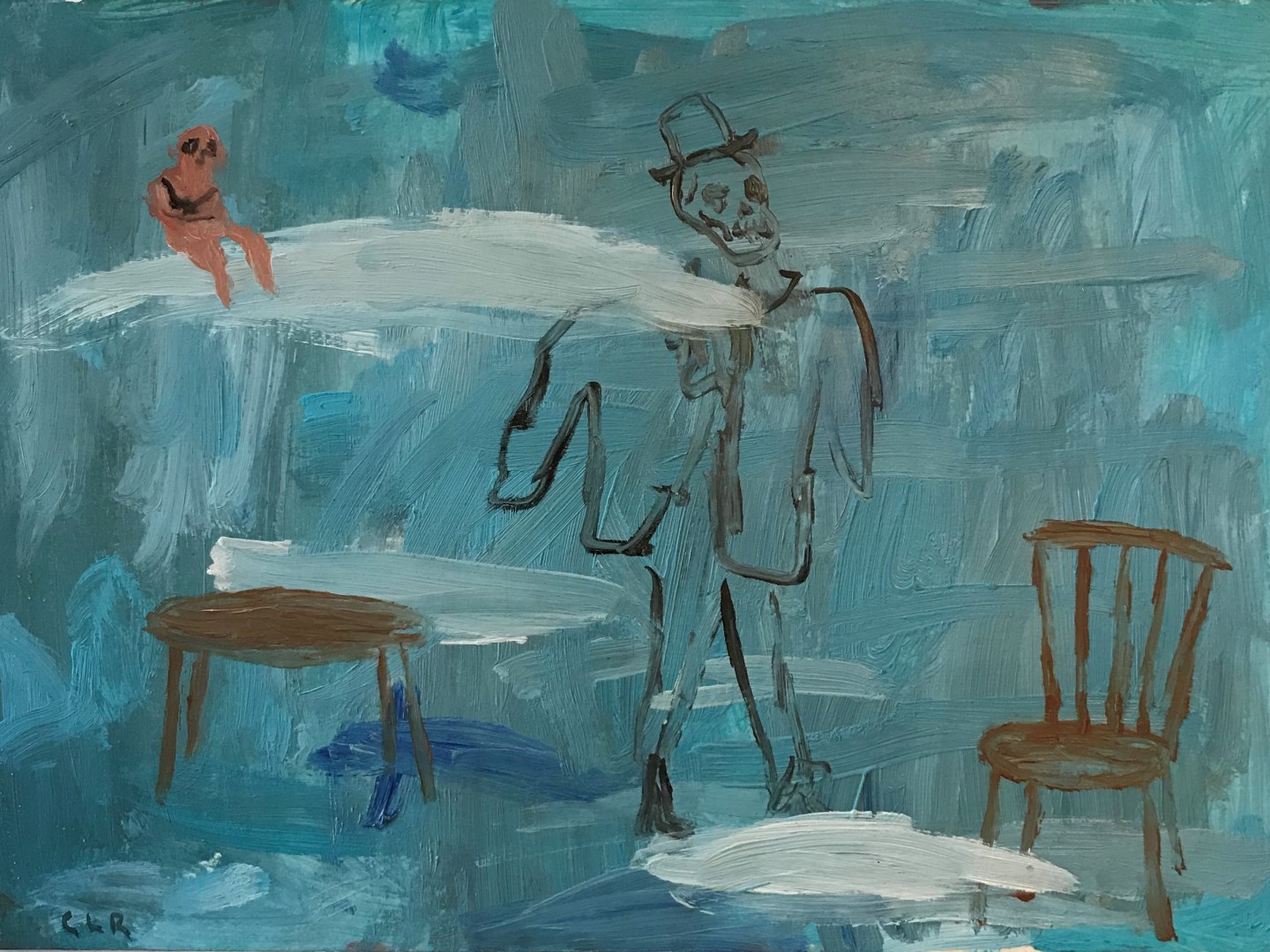 1. Do your research before acquisitions
2. Buy works that really strike you in some way
3. Buy as expensive as you can afford! Quality work from important artists will increase in value